A new district on the waterfront

Set to bring over 10,000 homes to the capital, Barking Riverside has been called one of Europe’s “most exciting placemaking projects.” Housebuilder & Developer’s deputy editor spoke to David Watkinson of Barking Riverside London.

The Barking Riverside project is set to transform a former industrial site along the River Thames into a new London district. A joint venture between L&Q and the Mayor of London, the development covers an area the size of London’s Hyde Park.

Based largely on brownfield land, Barking Riverside will deliver not just homes, but 65,000 m2 of commercial and leisure facilities, 148 acres of new parkland, and riverside walks along 2 km of river frontage.

With such a site requiring significant infrastructure of varying types, the master developer responsible for the design, planning and infrastructure delivery for the project Barking Riverside London (BRL) has committed to the delivery of seven new schools. Four of these are now open, and other facilities include an Ecology Centre and a new ‘health hub.’

Alongside this, in terms of transport and connectivity there is currently a new London Overground Station under construction on the 443 acre site, extending the Gospel Oak to Barking Line, and the team are soon to start work on a new pier for a Thames Clipper Uber Boat river taxi, both of which are expected to dramatically increase connectivity into central London.

David Watkinson, planning, design and communications director at BRL explains his role as “envisaging the place being created, and engaging the people we need to create it with,” which includes overseeing design, master planning, statutory consents, placemaking, communications and events for the project. Going back to the genesis of the project, he explains that though the scheme began in the late 2000s, the current Barking Riverside JV wasn’t formed until 2016 – in order to ramp up housing delivery on the site to over 600 homes a year.

According to David, it has been “an incredibly collaborative” project from the get go, with “continuous input” from stakeholders including the JV partners, Homes England, Transport for London (TfL), the London Borough of Barking and Dagenham, and, “crucially,” David adds, “local people.”

Currently, the plot developers L&Q and Bellway homes are involved in the construction of residential and commercial builds, while the design process is being led by the architecture and urban design firm Lifschutz Davidson Sandilands.

Being such a large scale project, Barking Riverside has been underpinned by a rolling programme of masterplanning, land use, and other regulatory consents.

The original site-wide planning permission was granted in 2007, based on a proposed extension of the Docklands Light Railway from Beckton, but the DLR line was ultimately unviable. To ensure sustainable transport to the site, BRL worked with TfL to secure and part-fund the extension to the London Overground network which was consented under a Transport and Works Act Order in 2017.

A new site-wide planning application was then prepared and submitted in tandem, and the team are now working under the most recent revisions to this which were consented in 2018.

BRL has led this planning process across the site, preparing masterplans and design codes for 1500-2000 homes at a time.

David explains further how this works:

“We and our plot developers then prepare reserved matters applications for 180-200 homes beneath these and do so with the confidence that these sit within the consented scheme.”

“The approach is similar to some of the models being proposed in the Government’s recent planning white paper, and promotes confidence and allows for faster delivery.”

David tells me that one of the biggest challenges for a scheme of this size and complexity has been “ensuring that the place you deliver at the end successfully and authentically responds to the people who will actually live and work there.”

He says there’s already a “thriving community” living in Barking Riverside and the neighbouring Thames View district, and once completed the project will have increased the population by more than 30,000, as well as brought many new businesses to the area. As such, David tells me there is “huge pressure” to get this right for current and future residents.”

“We know all too well that simply building houses and facilities doesn’t automatically create community life, have a positive impact on those living close by or support the attractiveness of the place for future residents,” he continues.

“People want more involvement and a sense of ownership, especially when they are going to be living as part of the scheme for a long time.”

In order to promote this greater sense of “community ownership,” BRL is using polling platforms and co-design initiatives on key projects, enabling it to collaborate with members of the community to design facilities for current and future residents and visitors.

According to David, the team have challenged themselves to make good on their commitments by using social impact assessments, benchmarked in partnership with local people to measure success.

Besides its sheer size, one of the more noteworthy elements of Barking Riverside is the automated waste collection which has been organised for the site. It is on course to be Europe’s largest single waste collection system of its kind, and is a key element in helping mitigate the development’s carbon footprint.

According to David, a development of this scale would have required an estimated 19,000 waste bins, with eight industrial waste collection vehicles running full time throughout the site every day. Instead, the “cleaner, greener” system allows residents to deposit their waste into one of the planned 460 Envac waste inlets, located close to their homes.

Waste is then sucked at 40 mph through a subterranean network of pipes to a collection centre on the edge of site.

From an air pollution perspective especially, with no need for waste collection vehicles operating across the site, the masterplan incorporates safer, less polluted streetscapes. Carbon emissions and the safety issues associated with these vehicles are eradicated almost completely, and BRL estimates that the system’s inclusion will reduce waste vehicle related carbon emissions by at least 90 per cent.

“Integrating this future-proof technology will promote sustainability and liveability for all our residents,” David adds.

Alongside the environmental benefits brought by the waste system, BRL has incorporated a thorough ecological strategy into the project.

The site was historically Thames marshland, which was then reclaimed for industry through the 20th century, before being left derelict and contaminated.

In that time many of the native species began to recolonise, and there is now a “particularly rich” ecosystem in the area, he says.

According to David, the team views this as a “huge asset” for the site and community.

“Our approach is to work with the ecology, creating brand new habitats and relocating species as we work across the site,” he explains.

This is reportedly working well so far – in 2010/11, the BRL ecology team recorded 24 species of bird on site.

By 2018, it saw the number of species double to nearly 50 species – “remarkable for one of London’s largest live construction sites.”

PRIDE IN THE PROJECT

Since 2016, the team have been focused on securing the transport connections, investment and partnerships needed to deliver the project.

David believes that BRL is now in a “strong position” to deliver an “exceptional place,” and the project is starting to gain recognition – “particularly for the way in which we are working with our growing community to shape further phases of the project and create a place that they know, understand and love in the way that we do.”

At the stage the project has now reached, he believes that finding the right partners and driving design quality are “key to building confidence” in what the team is doing, and ensuring that, ultimately, “they create a place people are proud of.”

“We proudly view this project as an opportunity to have a positive impact on the lives of those who already, and of those who will come to live and work here,” concludes David. 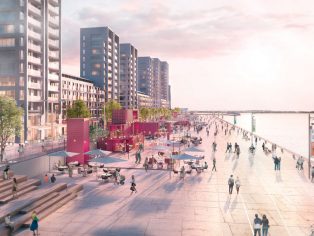