The first airport by acclaimed architects Massimiliano and Doriana Fuksas it is set to become an iconic landmark that will boost the economic development of Shenzhen -one of the fastest-growing cities in the world. Won by international competition, it has undergone a remarkably rapid process of design and construction, completing within 3 years.

The terminal – the largest single public building to be built to date in Shenzhen -encompasses 63 contact gates, with a further 15 remote gates and significant retail space. It will increase the capacity of the airport by 58%, allowing the airport to handle up to 45 million passengers per year.

The sculptural 500,000 sq.m. / 5,381,955 sq.ft (approx.) terminal, evokes the image of a manta ray and features a striking internal and external double ‘skin’ honeycomb motif that wraps the structure. At 1.5 km long, with roof spans of up to 80m, honeycomb shaped metal and glass panels punctuate the façade of the terminal allowing natural light to filter through. On the interior, the terminal is characterised by distinctive white conical supporting columns that rise to touch the roof at a cathedral-like scale.

The focal point of the design is the concourse located at the intersection of the building. Consisting of three levels – departure, arrivals and services – they vertically connect to create full height voids, allowing natural light to filter from the highest level down to the lowest. 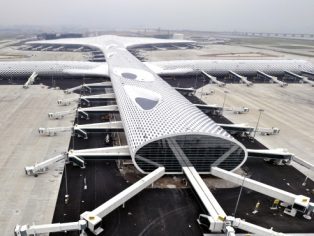 The 1.5km long terminal evokes the image of a manta ray © Studio Fuksas 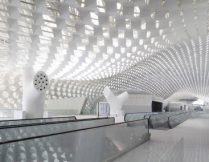 Interior view with honeycomb pattern reflected from above © Studio Fuksas