The store has been built on stilts above a 450 space car park, which includes six spaces for electric vehicles. The new store will include Sainsbury’s clothing range, a restaurant and an in-store bakery. A new dentist practice has also opened within the store.

Barr Construction delivered Sainsbury’s first hybrid steel and timber store, with a steel frame from the ground up to the sales floor and a timber frame to the ceiling. The roof was completed with timber cassettes which resulted in a smaller carbon footprint.

The store is equipped with a biomass system for managing water and heating for increased energy efficiency and has rain water harvesting for flushing the toilets. The ceiling is fitted with three north lights the length of the building to improve natural light within the store.

As part of the project, Barr was involved in the £2m highways improvement scheme for better access to the store and to increase the capacity of road network in the area. New traffic signals were installed at the junction of Penistone Road and Leppings Lane which have now been handed over to Sheffield City Council’s Highways team. 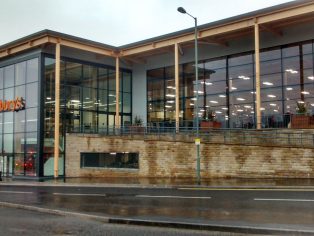