The new market “Encants Barcelona” is located in the old “Bosquet dels Encants”, at the intersection of Avenida Meridiana and Castillejos Street, in the Eixample district, and has a total area of ​​33,306 m2.

The project for the new “Fira de Bellcaire” Market provides a design where commercial activity is carried covered and shaded, under a large deck, while preserving the purchasing feeling outdoors. The commercial solution proposal puts street level an important part of the commercial offering, consisting of establishments and auction activity, as well as certain services (offices, restaurants, restrooms, multipurpose room) but without any building that acts as a closure, which form an open space that will have its main facade in Meridiana Avenue and Plaza de les Glories, an open area with good access to public transport. The rest of the commercial offering that now has the market (made up the rest of stalls and shops that are not street level) will be arranged along a continuous path in a very wide street, which rise from the level 0 of the square and down again. Finally the equipment have a clousure perimeter, that allows a security in the times when the market does not work. 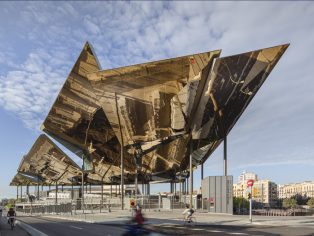