It takes good architects to give form to the political will and the City of Birmingham has appointed successive excellent firms to do so, first Rogers whose fine design was never realised, and latterly Mecanoo whose first major UK project this represents. Playing an important role in Birmingham’s Centenary Square, the new Library of Birmingham is an impressive and bold addition to the city, a truly public and civic building. It has set a precedent for the scale of the buildings on the square, which helps to animate the place and stipulate a sense of enclosure. For the city, this is a significant public sector investment, which has not only provided a new integrated public library but also helped to regenerate the city’s cultural heart and helped link the Westside to the city core.

Its intriguing section connects the building’s internal atrium to the square outside, creating a number of levels where users can enjoy the spaces. The journey through the building reveals itself through an interlocking atrium, tying together a range of volumes and providing glimpses of natural light.

From the ‘Harry Potter’ rotunda to the ‘Willy Wonka’ style glass lift, not to mention the more pedestrian escalators, the library is a journey up through the five floors of the book rotunda which houses the reference library – akin to the British Museum Reading Room – to the archives placed counter-intuitively but successfully on the upper floors. This is a journey of discovery and fun for all ages and backgrounds. The library has bought millions of people into the city and demonstrated how powerful architecture can play a role in the lives of communities.

The interesting filigree screen on the elevations creates a strong sense of place and ever changing vistas from within. Externally, it is the signature of this landmark and lends grace to the otherwise box-like forms of the three stacked palazzos. It also reflects the heritage of Birmingham’s Jewellery Quarter and plays out in shadows and reflections on the library’s walls and floors.

The elevated, landscaped gardens on the upper floors not only provide a sanctuary in an urban location but breath-taking views across the city.

The relationship to the Repertory Theatre including a 300-seat auditorium and reinstatement of the Shakespeare room are amongst some of the unique spaces in the new library complex.

The library is a world-class facility for a world-class city with formal and informal spaces for reading, relaxing, playing and participating in the programme of events. It has become a heart to the city’s cultural destination, transforming Centenary Square from an interim space to a vibrant city square. It has also changed the traditional perception of a library to one where families and readers can spend a whole day learning and engaging. The John Madin brutalist predecessor library will be much missed but its joyful 21st century replacement has already claimed its place in Brummies’ hearts. 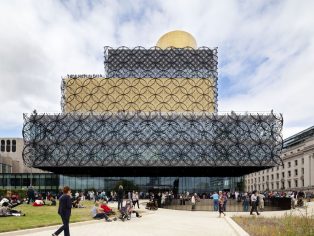 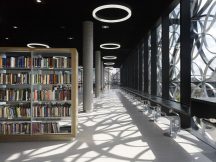