Hertswood Academy, which replaces the former Hertswood School, is a coeducational secondary school situated in the North East of Borehamwood. Hertfordshire.

The Academy will provide a world-class education for 1200 students aged eleven to sixteen and 200 post sixteen students. It was launched in January 2013 as an Academy in the existing buildings on the Lower and Upper sites and in late 2016 will move into new buildings on the Lower Site subject to this planning application.

The new Hertswood Academy will be an 8 Form Entry Secondary School accommodating 1,400 Pupils (including 200 Sixth Form Pupils). The Academy building will provide 12,005 sqm of new accommodation. Construction on site is planned to commence Summer 2016 with a completion date in 2018. 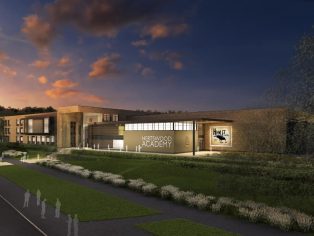