The new Everyman feels like a found space. It draws on the themes and ideas of Haworth Tomkins’ previous theatre work at Royal Court and Young Vic. Here all is new-build, yet it has the ambience of an old building, in part down to the use of recycled and exposed brick in the major areas of auditorium, bars and circulation. This is a building that breathes quality in its choice of materials, in its lighting and its signage. Everything has been thought about over and over and the right decisions reached. The tour de force is the first floor bar, a piano nobile stretching across the front of the building. Tucked in behind is a nook of a writer’s room with the air of a gentlemen’s club. The auditorium, with its burnt orange upholstery, is a clever cross between Matcham and the cosy cinema feel of the original.

The old theatre, converted from a 19th Century chapel on one of the city’s most important streets, was one of the most cherished of Liverpool’s cultural assets. It was though totally unsuited for productions and audiences in the 21st century. Consequently, the challenge to build a new purpose-built theatre on the site of the original was a brave but key move by the client team.

In selecting Haworth Tompkins they found a partner who understood the essence of the organisation and its ambitions. Consequently over the past nine years they have worked closely together to deliver a building of outstanding quality that retains the unique values of the Everyman.

The new building includes a technically advanced and highly adaptable 400 seat theatre which exactly mirrors the shape of the original, smaller performance spaces, rehearsal room, a sumptuous green room, public foyer, café and bar along with supporting office and ancillary spaces. Back and front of house are turned out using the same materials and with the same attention to detail. Haworth Tompkins have created a building that instinctively you want to reach out and touch; its handrails, walls and exquisite purpose-built joinery are all equally tactile. The concrete is good but never precious. However none of the elements shouts out, together they simply add to the whole, amplifying this exceptional piece of architecture.

The most discussed (and locally loved) feature of the new Everyman is the etched metal brises soleil on the facade featuring 105 full-length cut-out figures based on photographs of Liverpudlians.

This is a building that will age gracefully, continually enriched by the patina of daily use. It will both reassure and delight its loyal audience and those discovering this gem for the first time. 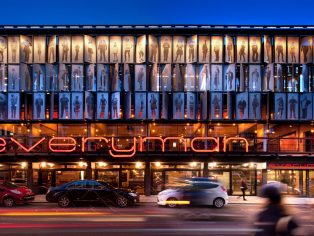 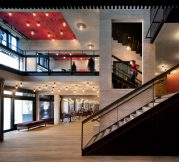