Located on the River Clyde, Clydebank Leisure Centre offered an opportunity to make a flagship architectural statement for this wider regeneration and also created challenges for the design and construction team.

Gareth McKnight, the associate at Kennedy Fitzgerald who designed the scheme, explains:

“It was a very complex brief for a sports centre on a triangular site. An eight-court sports hall shouldn’t really fit on that site, so it was a pragmatic approach but the architectural language was looking back at the old industrial buildings.”

The building itself occupies virtually the entire site and West Dunbartonshire Council needed to lease another plot due for development that bordered the site to provide BAM Construct with space for a site office and goods yard.

Before BAM Construct could begin sinking the five concrete cores to accommodate elements such as the lift shafts and the sheet piling used around the perimeter of the pool, the site had to be surveyed for World War Two bombs.

No unexploded ordnance was found, but the design and construction team had to work around another key vestige of the site’s shipbuilding heritage that the council was willing to retain – the slipway.

With the council keen to keep as many links with the site’s shipbuilding past, Kennedy Fitzgerald used the restrictions of the tight site and need to retain the slipway to create an interesting architectural effect.

“These long overhanging elements hark back to the days of the shipbuilding,” says McKnight, who adds: “It’s quite an elemental building, there’s a lot of life in the design.”

The Belfast-based practice used both design and the specification of interesting materials to try and create a feeling of life and heritage on the external facade. Marshalls paving slabs have been brought in, but the main focus for realising this design intent was via the facade. This features a mixture of glazed brick specified for the ground and first floor with an aluminium anodised rainscreen cladding system of tongue and groove panels used on the upper levels. 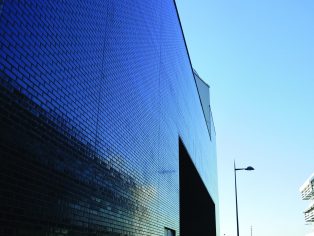 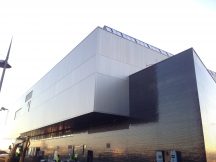 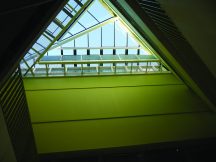