Work has started on site at the Stretford Mall in Manchester on plans to build a new £1.3 million 17,000 square foot Aldi food store.

Leading architectural practice, Pozzoni was appointed by mall owner Lunar Stretford Sarl in January 2014, to re-visit the original design of the store in order to obtain planning approval for a larger outlet than previously planned.

The existing vacant unit, a former Wilkinson store, will now be demolished to provide the Aldi food store with a remodelled car park and public realm adjacent to its prominent frontage. The schemewill also feature four new smaller kiosks immediately adjacent to the entrance of the mall, which can be used as additional retail space providing active frontage to the mall.

Planning approval for the new scheme was obtained in May 2015. The project is due to complete in March 2016. 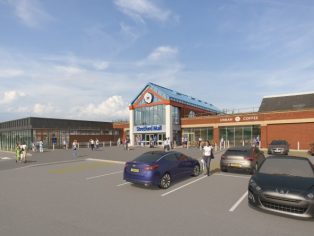