The single-storey building has replaced the pre-existing two-storey fire station, built in 1963, and comprises a two bay vehicle garage, offices and rest and recreation areas, as well as a new community room for use by local groups.

Commissioned by West Yorkshire Fire and Rescue Authority, the new station will house 14 firefighters and one fire engine, providing 24/7 cover 365 days of the year.

The facility officially opened on Thursday (16 July 2015) and Michael Fox, the deputy lieutenant of West Yorkshire, was guest of honour. 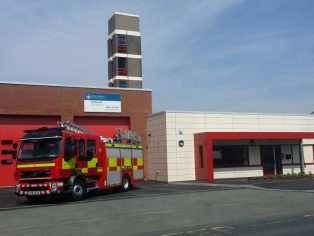