Three of its most popular locations, Harrogate, Horsforth and York, feature in the 2016 Sunday Times’ Best Places to Live list – and between them they are home to four of Redrow’s increasingly successful developments, with a fifth due to launch later this year.

Horsforth in Leeds, West Yorkshire is already home to The Green at Horsforth Vale, a stunning development of two, three and four-bedroom houses from Redrow’s Arts & Crafts inspired Heritage Collection, with four-bedroom detached homes currently available from £321,950; and the neighbouring Abode Horsforth, with two and three-bedroom properties from the company’s more contemporary-designed range, starting at  £296,950.  Further three, four and five-bedroom homes are coming soon at  Woodlands.

Meanwhile in Harrogate, North Yorkshire, there is Devonshire Gardens, boasting houses from Redrow’s Georgian inspired Regent Collection, which currently has four and five-bedroom properties for sale from £314,950.

All stunning homes, all in an ideal location – and here’s why, according to the Sunday Times: “Harrogate this, Harrogate that: it crops up on every list of the best places to live/breed/shop/drink tea/eat cake/go grey, so, for a change, we were going to leave it out. But in the end, we couldn’t.”

It went on: “Independent cafes and restaurants are popping up at breakneck speed, bringing Brooklyn-inspired decor, smashed avocado and crushed hemp seeds to the Yorkshire masses. The station is undergoing a £1.2m revamp and the line between Leeds and York is being electrified, cutting journey times to less than 30 minutes.”

In conclusion: “Cosmopolitan and classy, but it still has old-fashioned Yorkshire charm.”

Meanwhile over in Leeds, “the only big league city in Yorkshire” – “with two universities, regional BBC and ITV studies, Opera North at the Grand Theatre and in Kirkgate Market, an Edwardian extravaganza of iron and glass covering the largest marketplace in Europe” – Horsforth is the Sunday Times’ favourite address thanks to excellent transport links.

The report continues: “As of next month, the number of trains serving the city centre will double from two an hour to four, and Leeds Bradford Airport is 10 minutes away by car. For beer and live music, the Forge is best, and Horsforth does well for the sort of local Italian restaurant that is never going to get the critics purring, but that serves its local community well. Try Café Marinetti or Trattoria Il Forno.

“About £700,000 will buy somewhere big and grand; £500,000 will stretch to a substantial four-bedroom house. There are two outstanding primary schools and the local secondary, Horsforth School, is rated good and makes the top 20% nationally for exam results.”

With four-bedroom detached homes at The Green at Horsforth Vale priced from only £321,950 and a new bus link to the train station, Redrow’s development is looking a sure-fire winner.

York’s place in the Sunday Times’ list was sealed by its history and its impeccable connections.

“The Minster, one of the world’s great buildings, and the winding streets to its south attract tourists, but the locals are well served by modern-day shops and transport links; trains to London take just two hours,” says the report.

It also points out that houses in some parts of the city can top the million-pound mark.

Patsy Aicken, sales director for Redrow Homes (Yorkshire), said: “Well we don’t like to say we told you so, but … Redrow’s ethos is to build good quality homes and we don’t want to build those homes just anywhere. There is no point having the best home in the worst location; we develop high standard homes in areas where people can have a good quality of life.

“The Sunday Times Best Places to Live guide confirms that Redrow chooses the perfect places in which to live, places in which people can live happily and where there are good amenities and connections for work and home and family life.” 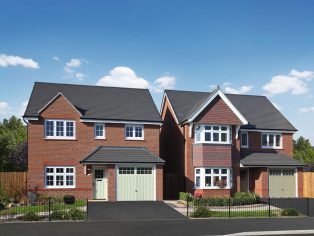 Heritage Collection homes similar to these are being built at The Granary, York