A car park in Miami has been announced as the world’s coolest, shrugging off rivals from across the globe in a competitive new design awards. The car park, 1111 Lincoln Road, Miami, in the US was praised for its “bold, innovative and striking design” by the judges’ panel.

It was also good news for UK with Charles Street in Sheffield being awarded third place and Millennium Point in Birmingham also making the top ten of the global list.

Thousands of car parks were involved in an initial worldwide search, with a final shortlist of 10 taken forward and analysed by the expert eyes of Jamie Mitchell, Editor of DesignCurial and Assistant Editor of FX Magazine, and Stress Free Airport Parking co-founder, Dave Greenbrown. The judges deliberated over each car park, scoring on categories such as design, innovation and each building’s relationship with its surroundings. 1111 Lincoln Road, Miami, came out as the overall winner with Lyon’s Park de Celestine’s, France, and Charles Street in Sheffield, UK, second and third place respectively.

1111 Lincoln Road, designed by Herzog & de Meuron, was completed in 2010 and has been described by many as resembling a house of cards. The structure wowed the judges with its impressive design and embrace of the community by providing room for public exhibition space and shops.

Second placed car park, Parc des Celestins in Lyon, France, was designed by architects Michael Targe, Jean-Michel Wilmotte and Daniel Bure. Using a mirror to reflect daylight through a central core, the building impressed judges with its unique lighting solution which they both described as both “stylish and innovative”.

The UK confirmed a place in the top three with Sheffield’s Charles Street Car Park striking a chord with the judging panel. Designed by Allies and Morrison Architects, the car park is often referred to as the ‘cheesegrater’ by Sheffield residents due to its unique jagged cubed exterior. The judges recognised the design’s ability to turn a traditional car park shape into a visually striking building.

“Selecting a winner for the inaugural World’s Coolest Car Park Awards has not been an easy decision. Having started with thousands of car parks from all over the globe, we have seen so many awe-inspiring parking buildings that are worthy of praise.

“In an industry perceived as purely functional and dull, we created these awards to highlight some of fantastic design and creativity that exists in car parks around the world. 1111, Lincoln Road is just such a wonderful building with the addition of a great community programme, that it had to be our winner.

“It’s also fantastic to see the United Kingdom well represented and make it in to the top three. At first glance Charles Street Car Park in Sheffield appears to be a chic contemporary apartment block, when in fact it is a sleek and stylish parking building.”

“With more than a billion cars on the world’s roads, it’s hardly surprising that some of our best architects have turned their talents on the humble car park.

“While most of us still have to settle for parking our cars in utilitarian concrete hulks, the 10 car parks in this shortlist show how imaginative and innovative these buildings can be.

“The winner – Herzog & de Meuron’s 1111 Lincoln Road – is a brave work of architecture that shows off its function rather than attempting to hide it. With no exterior walls, the cars parked inside become an ever-changing feature of the building – and the open design means it also gives great views over the city.

“But as well as being a bold, striking structure, this is also a carefully thought-out, multi-faceted work of architecture that brings together retail, parking and leisure facilities. Much more than a car park, it is now an architectural icon that’s beloved of those who use it – there have even been weddings and yoga classes there.”

For a list of all the 10 car parks in the world – http://www.designcurial.com/news/herzog-and-de-meurons-1111-lincoln-road-beats-the-lot-to-be-named-worlds-coolest-car-park/ 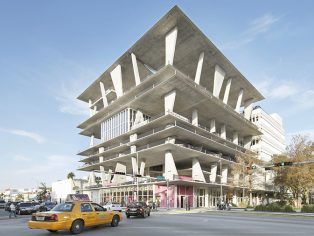 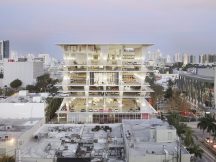