In partnership with Make Architects and Sir John Soane’s Museum, the World Architecture Festival (WAF) has announced the call for entries for the second edition of The Architecture Drawing Prize. Launched in 2017, the prize is conceived to celebrate and showcase the significance of drawing as a tool in capturing and communicating architectural ideas.

The Architecture Drawing Prize embraces the creative use of digital tools and digitally-produced renderings, while recognising the enduring importance of hand drawing. The organisers invite entries of all types and forms: from technical or construction drawings to cutaway or perspective views – and anything in between. Drawings may, by varying degrees, be entirely speculative or relate to real projects.

Entries are welcomed by architects, designers and especially students from around the world. The inaugural prize in 2017 attracted 166 entries from across the globe, with sixty percent of the shortlisted entries submitted by entrants aged 30 and under. In order to attract even more student entries in 2018, the organisers continue to offer a reduced entry fee of £50 for all entries by students and those under 30.

Entries are now being accepted across three categories: 1) hand drawing; 2) digital drawing; and 3) hybrid drawing, combining the two. Submissions will be evaluated on the basis of their technical skill, originality in approach and ability to convey an architectural idea, whether for a conceptual or actual building project.

The winners and shortlist will be announced in October, and will be on display at a dedicated exhibition at the Sir John Soane’s Museum in London from 17 October – 18 November.

The category winners will each receive a delegate pass and two nights in a hotel during the World Architecture Festival in Amsterdam, 28-30 November 2018. They will be invited to participate in an event on the Festival Stage at WAF, and receive tickets to the Gala Dinner.

“WAF is delighted to work with Sir John Soane’s Museum and Make to showcase the best and most evocative contemporary architectural drawings, which show that drawing remains a primary way of developing and communicating architectural ideas.”

The winner of the inaugural prize in 2017 is Momento Mori: a Peckham Hospice Care Home by Jerome Xin Hao Ng. Judges commended him for a superbly conceived and executed perspectival view looking down through the building from roof level, and praised the drawing for its technical skill and the way in which it demonstrates the settings for multi-generation social interaction found in an institution such as this.

“When we decided to create The Architecture Drawing Prize we wanted to celebrate the art of drawing and put it back at the heart of architecture. New technology has changed so much about how we design buildings, but the drawing conveys something truly unique. It shouldn’t be lost or replaced, it should be part and parcel of the architectural process.” 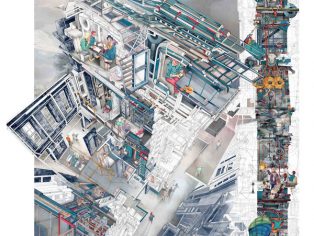