The anticipated moment for construction work to begin on Dunfermline’s new museum and art gallery has arrived.

Partners gathered to mark the occasion on site which will now see work begin on a modern, purpose-built museum and art gallery space in Dunfermline’s town centre. The part Heritage Lottery funded project will see a brand new facility constructed and integrated with the surrounding historic listed buildings, including the Dunfermline Carnegie Library.

Speaking at the get-together, the Chair of the City of Dunfermline Area Committee, Cllr Helen Law said she was very pleased that construction work could now commence.

“This is a hugely ambitious and exciting project for Dunfermline. Local people have been aware of and interested in the plans for quite some time and I’m sure they’ll be pleased at this important milestone being met.”

“The facility will bring an impressive new focal point to the Heritage Quarter and wider town centre. In future it will be an important contributor towards the economic growth of Dunfermline’s town centre.”

“This is a complex project that has had a long lead time and it’s great that we can celebrate work beginning on what will be a remarkable facility. The new museum and art gallery will undoubtedly raise Dunfermline’s cultural profile and help to increase tourism to the area.”

“The community is already playing a big part in the project too. Over 250 volunteers have taken part in activities like the archaeological dig and packing up of the library’s Robert Burns Murison Collection. I look forward to seeing more of these community based projects, which give really unique cultural opportunities to people, take place during the two years of construction.”

“We are now a major step closer to this medieval capital having a museum which reflects its importance in Scottish history. Many people have already been involved in exploring the history of the town in the build up to the new museum. Now that the physical work is underway, we look forward to seeing it begin to take shape as a contemporary cultural hub and a gateway to Dunfermline’s remarkable heritage attractions.”

Stuart Cross, Chair of Fife Cultural Trust who will run the building on behalf of Fife Council, said:

“I am delighted that work is beginning in earnest on this marvellous building which will deliver a world-class cultural facility, museum and art gallery as well as secure the future of the world’s first Carnegie Library for years to come.”

“Developing and literally building on the first Carnegie Library to introduce this major new facility is something that Andrew Carnegie would have been proud to see in the place of his birth.”

“Designing and planning a modern building to tie into adjoining existing listed structures is not easy and our team of managers and designers have worked closely with the Council to make sure that everything has been thought through and our Client is getting exactly what they want and need. It’s taken time, but that has been time well spent when you look at the end product. The level of detail we’ve gone into during the planning stage should allow us to deliver a showpiece building on time and budget.” 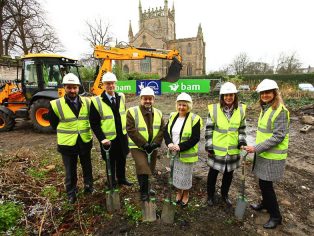 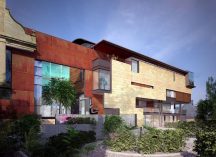 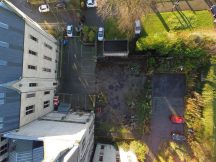 An aerial shot of the land behind the Dunfermline Carnegie Library where the museum and art gallery will be built. The street-front façade of the town house building next door to the library will remain but the rear of the building which you can see at the bottom of this image will be demolished to make way for the facility which will be fully integrated with the world’s first Carnegie library.