A shortlist of 30 projects has been selected from a record entry of over 300 British architecture and furniture projects in the national Wood Awards 2014 – the UK’s premier award scheme celebrating excellence in design in wood. The shortlist can be viewed along with shortlisted furniture pieces at 100% Design, 17-20 September 2014, Earl’s Court London, the biggest event during the London Design Festival.

PEFC, in partnership with the Malaysian Timber Council (MTC), is a key sponsor of this year’s Wood Awards.

The Wood Awards is the UK’s premier award scheme with a 40 year record of supporting excellence in the use of timber in architecture, building design and furniture. The Awards recognise, encourage and promote outstanding design, craftsmanship and installation using wood throughout the UK and has an ever-growing credibility within the design community.

The winners of the Wood Awards categories and the recipient of the Wood Awards Arnold Laver Gold Award for the ‘winner of winners’ will be announced on the 18 November at a reception in London hosted by the Worshipful Company of Carpenters, with the Wood Awards 2014 supplement published in RIBA Journal’s December issue.

The Wood Awards is only made possible by the major sponsorship of the American Hardwood Export Council (AHEC), the Carpenters’ Company, TRADA and Wood for Good. Other sponsors include American Softwoods, BRE and the Forestry Commission. New from 2014 is the combined sponsorship of the Programme for the Endorsement of Forest Certification (PEFC) with the Malaysian Timber Council (MTC), and the British Woodworking Federation (BWF) as a supporter. The Wood Awards Gold Award is sponsored by Arnold Laver.

The Bespoke and Production-Made furniture shortlisted Furniture categories pieces will be exhibited on Wood Awards Stand L370 at 100% Design 2014. Full details of all sponsors and information on the Wood Awards can be found at www.woodawards.com. 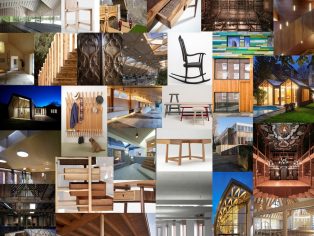