Time for change was the call at a conference organised by the University of Huddersfield’s School of Art, Design and Architecture.

The conference, entitled Women in Architecture, highlighted the difficulties facing women succeeding in architecture and called for equality to be acknowledged and actively encouraged across all areas of the industry.

The University of Huddersfield, which received a Gold Award in the recent Teaching Excellence Framework, was ranked sixth in the country for architecture in last year’s Guardian University League Tables and the subject area scored 97 per cent for overall student satisfaction in the National Student Survey.

Delegates were welcomed to the University by Huddersfield’s Head of Architecture and 3D Design, Professor Patricia Tzortopoulos Fazenda, who set the scene highlighting the stark figures that show that the number of women working in architecture was in decline and that generally, one in five wouldn’t recommend it as a career.

The keynote speaker was RIBA President Jane Duncan who took up the argument and since her appointment in 2015 has started to press for gender parity.

Ms Duncan has run her own practice for nearly 40 years and knows the challenges facing architects around the country.

She took her knowledge and campaigning to the national stage when she was appointed RIBA Vice-President for Practice and Profession. Her fight for the underdog took on new impetus when she became the Institute’s Equality and Diversity Champion.  It was through this role that she felt she would achieve more if she were president, particularly in championing the cause for women both already in the profession and those joining it.

Jane Duncan’s enthusiasm for her profession and her passion for equality was very evident as she urged the student audience to work to change this disparity, particularly in terms of work-life balance and women having to sacrifice their careers to start a family.

She talked about the lack of career optimism amongst women in the profession and stressed the importance of engaging a mentor to help guide and encourage. The President said,

“I’m convinced that women probably need it more than men. Above all, it will give you confidence to take the necessary risks to succeed.”

Her parting shot to raise the bar towards gender equality was that women architects need to be visible and act as role models for those following.

The morning keynote was delivered by Huddersfield professor Dilanthi Amaratunga, who is Director of the University’s Global Disaster Resilience Centre. Today she is Professor of Disaster Risk Management and though not an architect she was worked with architects and the construction industry for nearly 30 years.

Professor Amaratunga used her own career to offer a comprehensive series of tips on how she had learned to manage her career.

“Never promise what you can’t deliver, make connections, be patient and be prepared for setbacks.”

The inspirational list – though perhaps obvious in themselves collectively enthralled and inspired the audience.

Professor Amaratunga emphasised that to be successful you had to find that niche of your own.

“Know what you have to offer that is different, new or unique, at the very early stages of your career, it’s important that you identify what your ‘market differentiater’ is, your unique contribution or niche, and look for the gap that you could fill.”

She also stressed the importance of having a ‘good antenna’ to be aware of “what’s happening around you” and the need to manage your presence on the internet.

Also speaking on the day were award-winning architect Lisa Raynes, who is a past Chair of the RIBA North West Solo Practitioners Group and of Women in Property North West Branch, the Joint Chairs of Manchester Women’s Design Group, Val Garret and Joan Rutherford. 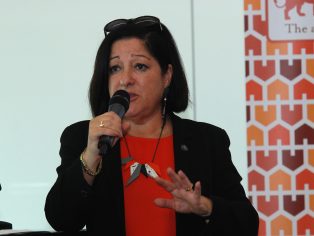