Winner announced for the 2014 Wood in Architecture Award

Arup Associates beat a line-up of five other amazing contenders to claim the 2014 Wood in Architecture Award with its Sky Believe in Better Building, which is the UK’s largest timber office structure.

After much discussion and comparing the merits of each shortlisted project, the team of judges including, Meredith Bowles – Founder of Mole Architects, Russell Brown – Founding Partner of HawkinsBrown, Benjamin Garcia Saxe – Founder of Benjamin Garcia Saxe, Harley Grusko – Associate as well as Project Architect for Perkins+Will Vancouver, and Mette Melandsø – Founding Partner at PIR 2, and winner of last year’s Wood in Architecture Award, finally made their decision to award the prize to Arup Associates for their Sky Believe in Better Building in London.

The judges felt that this project best fulfilled their criteria, which were its extensive use of wood in the structure, and the sustainable message it gave out. For them it was a clear winner due to the fact that it was the biggest and most challenging entry. Judge Harley Grusko stated:

“I know the complexity that goes into a building like this.”

But what really swayed the judges was the sheer size of the building. Harley Grusko said: ”

It is the biggest, most challenging project that we have seen here today. It was the only one that uses wood to such a high degree and with such precision. Large scale matters.”

“It is pretty amazing for a commercial building of that size to have a timber structure.” 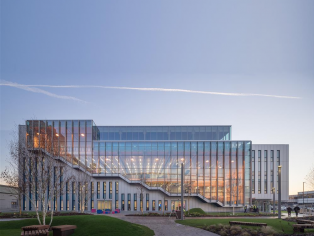