The awards were hosted by the BBC newsreader, Louise Minchin and co-hosted by Acivico Limited, the Built Environment Hub and the Chartered Institute of Building’s (CIOB) West Midlands branch.

Long-established UK construction consultancy Cundall scooped three top awards including the highly-acclaimed Constructing Excellence Award for Innovation for ‘Cundall Virtual Acoustic Reality’ – a cutting-edge tool delivering a visual tour of a building before the work commences.
The firm also picked up the Legacy Award for Sustainability while Cundall employee Charlotte Homer was named Young Achiever of the Year.

O’Brien Contractors were also among the night’s big winners as the firm received the SME of the Year award.

The prestigious Project of the Year Award went to Atkins, Mace & Network Rail for the inspirational transformation of New Street Station in Birmingham, one of the biggest station refurbishments in Europe.

Picking up the outstanding 2016 Heritage Award was Shaylor Group for the restoration of Royal Shakespeare Company’s (RSC) Swan Wing. The highly-detailed renovations included work to the facade and interior of the Grade II* listed building which aimed to reveal the building’s hidden heritage and enhance the public spaces.

Client of the Year – WM Housing

SME of the Year – O’Brien Contractors

Young Achiever of the Year -Charlotte Homer from Cundall 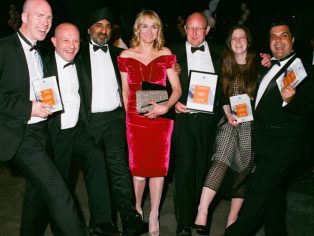