Wales Air Ambulance Headquarters off to a flying start

Property Development firm Hacer are nearing completion of the first phase in construction of a new head office for Wales Air Ambulance.

The £1.8 million project in Llanelli is being managed by Hacer and will mean the service is able to get to rural and coastal sites quicker.

The new purpose-built headquarters attracted a £750,000 property development grant, secured by Hacer, and will boast state of the art offices, an administration block and also a hanger to house one of the service’s helicopters.

“We are delighted to be involved in such a prestigious project that will make a real difference to people across Wales. The new premises will be a real boost to the service’s capabilities. To think that our contribution to this project will play a part in the fantastic work of this charity is really humbling and I look forward to moving the project through to the next stages.”

The site at Llanelli Gate will host both the helicopter and fundraising divisions, which are currently split between two separate premises in Swansea.

“We’re delighted that the works on the new headquarters are coming along so well and are really looking forward to seeing the project progress.

“This is such a unique opportunity for Wales’ air ambulances. Thankfully, we’ve secured a grant that will help towards the head office development, but the new airbase will be funded entirely by charitable donations from the people of Wales, and now we need their help to raise £500,000 to construct the hangar and helipad.

“Supporters won’t just be helping us build the base; they will be helping to build our future too. Owning the site will save us money in the long run, meaning we can carry out even more lifesaving missions. “

Phase two of the works will see the construction of the landing pad, fly zone plus a pilot and helicopter welfare block. 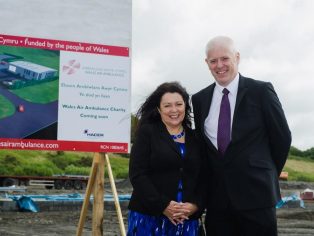