Johannes Baar-Baarenfels was the only Austrian among more than 40 distinguished international architects to present his project “Sofia Serdika” at the Schusev Architecture Museum in Moscow. The Financial Times calls Baar-Baarenfels’ glass domes to preserve the Thracian-Roman ruins in Sofia a “highlight of the exhibition”.

From January 31 to May 10 2020 the exhibition “Public Architecture – Future for Europe” is shown at the Shusev Architecture Museum in Moscow. The Austrian architect Johannes Baar-Baarenfels’ Nezavisimost Square project in Sofia “is a highlight of the exhibition,” reports the Financial Times. His project is presented alongside the works of more than 40 European architecture firms committed to new architecture respecting the cultural heritage in Europe. Baar-Baarenfels designed and constructed three shell-shaped glass domes preserving the 2500 years old underground ruins in the city centre of the Bulgarian capital. “It is an honour for me and my team to represent Austrian architecture in Moscow with this project,” says Johannes Baar-Baarenfels.

During drilling work to expand Sofia’s metro, a vast site of ruins from the ancient Thracian and Roman city of Serdica resurfaced. A grid structure dating back to the Byzantine era, more than seven meters under ground level, was found stretching across Nezavisimost Square which is surrounded by Stalinist architecture. Johannes Baar-Baarenfels encased the ruins with three parametric-designed glass domes. They reveal the city’s ancient past in contrast with their 20th-century surroundings. The domes are separated by two bridges allowing visitors to walk above the site and take a look down at the architectural treasure below.

The three domes are membrane structures made of steel and glass. The exciting form is created by single as well as double curved glass panels. They span an area of around 16 x 16 meters. Designing a low rise of 2.10 meters was a static challenge in order not to divide the square.

With his striking structure Baar-Baarenfels creates a new awareness of public space and the city’s cultural heritage. “The relevance of the construction goes beyond its mere architectural significance”, says Baar-Baarenfels: “After all it is located right in front of the Bulgarian Parliament, the Council of Ministers and the President’s Office. It can be seen as a sign of a new beginning for the city, as its hidden ancient past is brought back to life through architecture that points to the future”. 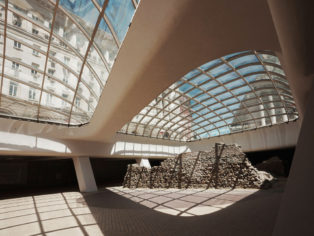