VEKA teams up with Burnley FC

The ‘clarets’ have made a new signing with Burnley-based VEKA Group as part of the Friends of Burnley FC in the Community programme.

Burnley FC in the Community is a stand-alone charity that works in Burnley and nearby communities on various projects. In less than a year since its launch in October 2016, ‘Friends of’ has already raised £20,000 through donations and fundraising activities to support its charitable work.

As the country’s leading PVC-U window systems company, VEKA Group is one of Burnley’s biggest employers, with a ‘team sheet’ of over 400 people from the town and surrounding areas. The Group takes an active role in the local community having also recently signed up as main sponsors for Rosegrove FC; a 300-strong club of young footballers aged from 3-13 years old.

VEKA Group won Employer of the Year at the recent Burnley Business Awards and Large Business Award at the 2017 Red Rose Awards, and is well-known in the area for its employee development and support; an asset which should be invaluable to Friends of Burnley FC in the Community when it comes to helping with the charity’s campaigning, fundraising and outreach programmes.

“As a significant employer in the Burnley area, the number of people that work here or are associated with VEKA through spouses or relatives is huge, so we take a lot of pride in getting involved with the community. VEKA has a reputation within the local area for really valuing its employees; it knows they’re its biggest asset. What better way to show that than to give back to the community our employees and their families live in?

“VEKA also takes an active role in fundraising for Pendleside Hospice – one of our charities of the yeare – and sponsorship, as with Rosegrove FC, but the ‘Friends of’ programmes really gives VEKA the chance to share some of its business knowledge and acumen with local charities and causes to help them grow individually. Everyone at VEKA is very proud to be patrons of the Friends of Burnley FC in the Community programme, even the non-Burnley supporters!”

“We couldn’t be happier to have VEKA Group as Silver patrons of our ‘Friends of’ programme. We as a charity are aiming to connect local businesses with community groups and causes so that companies can have a real and positive impact on the community. There are few better-known companies in the area than VEKA so to have them on board is a great ‘signing’ for us and we can’t wait to draw on their business expertise.” 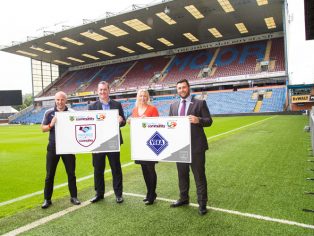