The Northern Powerhouse Partnership (NPP) chose VEKA Group’s Burnley headquarters as the location for the launch of its latest report; ‘Powerhouse 2050: The North’s Routemap for Productivity’.

Established in the autumn of 2016, NPP aims to increase the contribution the North makes to the UK economy. This will be achieved through cooperation with local stakeholders at all levels along with government. Following the publication of its first report earlier in the year – which focussed on Education & Skills, Infrastructure & Assets, International Competitiveness, and Leadership & Learning – the four primary capabilities of the Powerhouse 2050 report hones in on Advanced Manufacturing & Materials, Energy, Digital, and Health Innovation, with a series of specific proposals for government funding, business investment and closer collaboration across the North.

As the country’s number one PVC-U profile systems manufacturer and one of Burnley’s biggest employers, VEKA seemed to be the perfect location for the auspicious occasion and, with almost 100 people packed into the conference room, it was clear to see the demand for the latest literature from Northern Powerhouse Partnership had been eagerly anticipated.

Following an introduction from Director of Northern Powerhouse Partnership Henri Murison; former Chancellor and NPP Chair George Osborne delivered a rousing speech on the past, present and future of the initiative.

“One of the major aims is to improve connectivity. Northern villages, towns and cities are proud of their local identities and steeped with history but are perhaps not big enough to make a global impact by themselves. They are close enough geographically however to team up; the distance between Manchester and Leeds, for example, is shorter than the Central Line of the London Underground.”

“We have all the ingredients we need for the Northern Powerhouse to succeed, and now it’s time to make some decisions on what to focus on, because choosing everything, means choosing nothing. A great idea like this cannot live and die with any one MP or government, but if the North itself owns this idea, it will endure.”

The former Conservative MP for Tatton then handed over to Jake Berry – MP and Minister for Northern Powerhouse – who directly commented on the launch of the new report, saying

“The report contains some ambitious asks but it isn’t a wish list; it is a ‘call to arms’ for businesses in the region to unleash their full potential. Northern Powerhouse is here today in Burnley because it is a great Northern power town. Everyone here shares an ambitious vision. We are the makers, the innovators and the disruptors.”

Before leaving for an engagement with students at The University of Manchester, George Osborne and Henri Murison were treated to a whistle stop tour of the VEKA factory and mixing plant with Managing Director David Jones, and met with some of the newest apprentices at the company.

After the event, David Jones said:

“It has a been a pleasure for VEKA to host the launch of the latest Northern Powerhouse Partnership report, and as one of the primary capabilities is ‘Advanced Manufacturing & Materials’, VEKA seemed to set the scene perfectly.”

“VEKA Group has been operating in Burnley since 1986 and we have never stopped investing and innovating when it comes not just to manufacturing quality products but in providing the highest standards of working conditions for our employees.”

“Almost all of the speakers today called for Northern businesses to pull together, own the Northern Powerhouse initiative and work towards a stronger North. I think I am speaking for everyone at VEKA, when I say ‘we’re in’!” 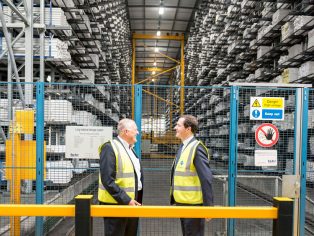