VEKA crowned ‘Employer of the Year’ at Burnley Business Awards

VEKA Group was thrilled to bring home the ‘Employer of the Year’ trophy from this year’s Burnley Business Awards. The Farrington Road company also gained a further three nominations making it one of its best years yet.

“Having been awarded ‘Business of the Year’ twice in the past, this year we were absolutely thrilled to have been named ‘Employer of the Year’. As one of Burnley’s biggest employers, we have around 400 people from the local area working across all our varied departments and we are very proud of the benefits we offer.”

“The evening was already one of great celebration for the team as we were nominated in a number of categories, including 2017’s ‘Business of the Year’, ‘John Kennedy Apprenticeship’ and ‘Manufacturing Excellence’. In many ways, it went hand-in-hand that we should be tipped for both ‘Employer of the Year’ and the ‘John Kennedy Apprenticeship’, as VEKA Group is well known for its commitment to staff training, satisfaction and career progression.”

The Burnley Business Awards takes place once every two years, which means competition is always hotly contested with entrants drawn from all industries across Burnley and the surrounding areas. This year, the ceremony was held in the stunning surroundings of Towneley Hall and, as a prominent event in the region’s calendar, was well-attended by local businesspeople.

‘Employer of the Year’ was sponsored by fellow Burnley business Ideal Recruit. Branch Manager Gina Deehan – who personally judged the category and selected VEKA Group as the winner – based her decision on how well the company engaged with is staff and used that feedback directly in the company’s development.

“I was really impressed with the way VEKA Group communicates with its staff. They are invited to complete employee engagement surveys; the results of which are put back into the progression and profitability of the business as a whole.”

“During the judging process, there was no doubt in my mind that VEKA Group considers its staff to be its most important asset and the positive attitude it demonstrates towards the employees at every level is commendable.”

“Everyone is delighted to receive this award. Without its employees, VEKA Group wouldn’t be the successful company it is today and so to be recognised in the local community for all we do for our people is a great reward for us all.” 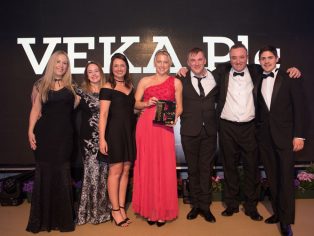