USE Architects breathe new life into Hackney with the help of DuPont™ Corian® rain-screen cladding.

In one of the major applications in the UK for DuPont™ Corian® high tech surface as a structural façade, architectural practice USE has created a distinctive new residential building in an area of London experiencing significant regeneration. As evidence of both the revival of its Hackney neighbourhood and the attractions of this pioneering design, every apartment in the development was sold off plan long before the building was complete.

Standing proud and pristine, in contemporary juxtaposition to the Victorian railway arches of London Fields, Mentmore Terrace makes an impressive addition to the local landscape – and has delighted its neighbours, according to the architect, by gently reflecting the light with its smooth, pale and elegant finish. Formed entirely from DuPont™ Corian®, which is fast becoming a favoured façade material for discerning developers, this high-performance weather screen promises to maintain its subtle and sophisticated beauty for the long term.

USE Architects has transformed Mentmore Terrace in London’s Hackney with a new residential building featuring an innovative façade with panels in a 4.5.1 ratio, made from DuPont™ Corian® hi-tech surface.

Architect Jo Hagan, who has been keenly involved for many years in the regeneration of local neighbourhoods such as his own community of Hackney, describes the concept behind the project:

“There is certainly an element of homage to the Bauhaus in the overall design, and the façade and its relationship to the windows and balconies is the only element of decoration. The concept is inspired by the book Fahrenheit 451 by Raymond Bradbury and so we have used a 4.5.1. ratio for the various panels.”

Jo says that he has thought about using DuPont™ Corian® for exterior cladding for quite some time, as he has the material in his own kitchen and has long admired its performance and aesthetic qualities. However, it wasn’t until the opportunities presented by this project that the notion became a reality – partly because Jo co-owns the building (his practice has moved from an older building next door to new premises on the ground floor) and thus, by also being ‘the client’ he had considerably more freedom to innovate.

“I’ve always wanted to cover a building in Corian®,” explains Jo, “But it needed a leap of imagination as it has not been used in this way, on a larger scale, in this country before. By working with the 4.5.1 ratio this allowed for a certain economy while visually breaking up the mass of what is otherwise a very simple structure. The design is both an abstract aesthetic and yet practical in that it offers more variety to the vertical elements and makes a stronger pattern with the shadow gaps, while also having the appearance of a solid mass from afar.”

The individual panels of DuPont™ Corian® that form the façade were fabricated and fitted with expert workmanship by specialists Urbana Exteriores from Spain, and have been installed using a Kiel fixing system to a Hilti frame. The structure also benefits from the installation of DuPont™ Tyvek® UV Façade a version of the renowned advanced breather membrane that has been created specifically to allow greater design freedom, reliable protection and enhanced energy performance for open-jointed facades.

Indeed, sustainability has been a key aspect of the design, which has been built to very high U-values. A heat exchange system recirculates through the building and grills have been routed out directly into the DuPont™ Corian® panels to assist this process.

“Today, architecture becomes radical through technology, by using the skin of the building to retain heat, there is pure articulation thanks to the inventiveness of industry.”

Rather than opt for one of the bright whites within the sophisticated colour palette for Corian®, Jo chose to go with a whisper of colour in the form of Private Grey, a discreet hue that transforms with the variable UK light it has a subtle quality, which according to Jo Hagan, “can make the building appear to float.” Thirty seven colours of DuPont™ Corian® are recommended for façade applications, offering a refined choice for cladding design, which together the notable versatility of the material, allows for an inspiring vista of decorative effects.

Completely homogenous and non-porous, DuPont™ Corian® is easy to clean and maintain, it is fire rated, resistant to graffiti, UV and climatic conditions – and should any damage occur – that material is repairable. DuPont™ Corian® Exterior Cladding is compatible with a ‘secret’ fix undercut anchor system and its lightweight, workable properties mean that fabrication and fitting run smoothly both off and on site. Whether creating an apparently seamless monolithic look, puzzle-like patterns or engraved, textured and backlit effects, DuPont™ Corian® offers a facade solution like no other.

DuPont™ Corian® is the solid surface with the broadest range of international certification for facade applications and has passed a series of fundamental tests for its application to the exterior of buildings. These include freeze/thaw cycling resistance, standards proving the material’s resistance to exterior environmental substances, fire performance tests, and tests for abuse resistance. Further information about these tests and certificates are available on request from DuPont.

For details of how to book a RIBA approved CPD seminar on Solid Surfaces for Rainscreen Facades please call us on 0113 201 2240. 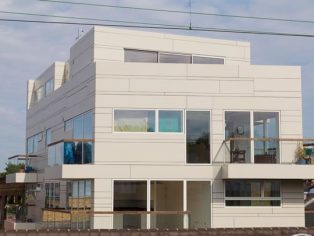