Work is underway to transform a former army barracks into the UK’s first housing and enterprise project for service veterans.

The multi-million pound development, at the former Erskine Barracks near Salisbury, will see it turned into a campus with homes and an innovative enterprise hub.

This unique development is the creation of regeneration and development specialists Our Enterprise. It will be the first time in the UK that a development has been built to address the needs of veterans by supporting them into independent living in an integrated community.

The project will establish the first purpose built community based campus for service veterans by creating homes and an innovative enterprise hub.

Forty-four homes will be built for former service personnel to rent for between six to 24 months and during that time they’ll receive business and skills training at the enterprise hub.

The project will provide a range of jobs for veterans who will be running the community café on site, their own ground maintenance enterprise alongside a range of volunteering, training and education opportunities to support their move to independence.

The project is geared towards helping service veterans to make the move back into civilian life which enables them to be self-reliant in a culture of enterprise rather than welfare.

The former Erskine Barracks was a field base for the US Army during World War II and was named after British war hero General Sir George Erskine. It was a major military base for UK forces right up until 2010 when troops were relocated elsewhere.

The abandoned site became available for housing development in 2010 but community leaders were keen for the area’s military heritage to be respected.

The Wilton Community Land Trust contacted Our Enterprise CEO Matthew Bell who listened to their concerns and agreed to help find a development partner who would tackle the project sympathetically.

Our Enterprise agreed to partner with Redrow Homes to buy the two sites and plans for 292 family properties to be built by Redrow and 44 one and two bedroom flats for veterans to be developed by Our Enterprise for Our Wilton Trust were approved by Wiltshire Council in 2016.

Together the Community Land Trust, Redrow and Our Enterprise have formed Our Wilton Community Interest Company to own the charity Our Wilton Trust which will develop and deliver the veterans’ accommodation.

The project has received considerable support including a £3.5 million grant from the Libor Fund and £500,000 from the Armed Forces Covenant. Triodos, Europe’s leading sustainable bank, is also in discussions to provide additional funding.

Work is now underway on the site with the first veterans due to move in mid 2018.

“We all owe a huge debt to our forces and a project like this is long overdue.

“These men and women risk their lives for our safety, yet when they return home they are often faced with huge difficulties.

“This project is about supporting them on their return and helping them make the transition into civilian life in a positive way.

“I believe we have come up with a scheme which will reinvigorate this community and transform many lives for the better. Hopefully it will be a blue print for future developments across the UK and help open doors for our returning service personnel.”

Former MP and parliamentary candidate for Salisbury and South Wiltshire, John Glen has backed the project from the very start. He said:

“I am delighted to finally see the Our Wilton project coming to fruition and immensely proud that Wilton is making a success of such a trailblazing scheme.

“The levels of community engagement in the project from the outset have been inspirational and I hope the completed veterans’ centre will provide a template for many other communities throughout the country to follow.”

Service veterans living and working in the area have been quick to support the project too with many offering to support and mentor those living on the campus once build is complete.

Greg Power served in 1st Battalion, The Coldstream Guards and saw active service in the Gulf, Northern Ireland and Bosnia.

“The Our Wilton project is so important for those leaving the army. It allows like-minded people to connect and discuss what they have been through without fear of judgement.

“When I left the military, I found it difficult to speak about what I had experienced because there were no facilities like this available at that time. This made me feel isolated and at times alone.

“The Wilton Campus will help returning veterans by providing them with the skills needed to adjust to civilian life. To be involved with the Wilton project will allow me to mentor veterans through their readjustment process and teach them skills to help them in the future.”

Redrow Homes has been involved in this project from the start and are building the private homes at Wilton Hill and Erskine Park.

“This is the first time we’ve worked on a project of this kind and it’s great to see construction finally get underway.

“We are thrilled and extremely honoured to be working closely with Our Enterprise to provide much needed homes and facilities for our local veterans. The facilities will also be open for use by Redrow residents and the wider Wilton community.

“As a result we’re keen to keep championing and raising awareness of the project and all of the many benefits it’s going to bring to the area.” 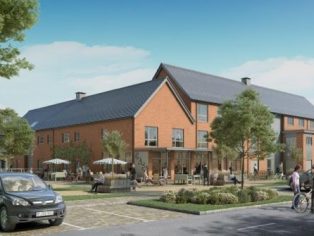