Ness Point, a house that appears to grow out of its dramatic setting on the White Cliffs of Dover, and 6 Wood Lane, an exuberant, and quirky self-build home, have been shortlisted for the 2017 RIBA House of the Year award.

The projects in the running for the UK’s most prestigious award for new houses are being revealed in a four-part Channel 4 TV series: Grand Designs: House of the Year.

The shortlisted homes will be revealed each week and the winner will be announced on screen in the final episode on Tuesday 28 November.

The latest two projects shortlisted for RIBA House of the Year 2017 are:

They join the following two houses on the shortlist, with another three yet to be announced:

The 2017 RIBA House of the Year is sponsored by Paint & Paper Library.

Ness Point has been designed as if it had grown out of the land in which it is embedded. With undulating thick walls along its length, it hunkers into the hill and is at one with thedramatic landscape of the White Cliffs of Dover. It goes further than respecting its setting, to really speaking of ‘place’.

The plan of the house, whilst modest in scale, very much describes a journey as you move through each floor with framed views which pull the landscape into the house. Theorthogonal central walls serve as dividers for the various functions of the ground floor but do not meet the undulating external wall, so that you are able to weave through theseries of rooms and there is the feeling of skirting along the side of a cliff face. As you reach the end of this spatial sequence and turn the corner (as in the prow of a ship), there is a space you can shelter from the weather (sea mist on the day we visited) that appears carved out of the rear of the plan.

Upstairs, the plan continues as an enfilade suite of bedrooms. Each room is orientated towards a different aspect of the landscape, across the passing ships of the English Channel to the cliffs known as Ness Point. The spaces are modest, the plan tight and every inch is put to good use. Each bedroom has a balcony no wider than half a metre, which gives a miniature, personalised garden to each bedroom. The interior detailing is beautiful and meticulous.

This house pushes the idea of ‘organic functionalism’ – as you move through the plan you discover everywhere new space relations, shifting axes and carefully-considered interruptions that lead the eye into another direction.

6 Wood Lane is an exuberant and well-loved home, carefully crafted by its owners as a self-build project over more than 7 years. Its idiosyncratic style connects each design aspect; from its curving form hovering above the street, to the detail of a chain operated roof light.

The architect’s ambition was to create a home for urban living, which contrasts tightly planned functional spaces with generous living spaces to maximise daylight and views. The building achieves this spatial contrast: a small entrance, tiny bathrooms and boat-like staircases, uncurl into connected living spaces, with views between areas in the house and out into the garden.

A slim store beneath the entrance seat perfectly sized for tennis racquets; a luminous green interior to the post box; a curved blue desk for making sculpture; a yellow floor beneath a quirky, zig-zag, glazed winter garden dome and a functional shed hidden in a cosy garden come together to create a surprising house that will engage and provoke debate for its occupants and visitors. 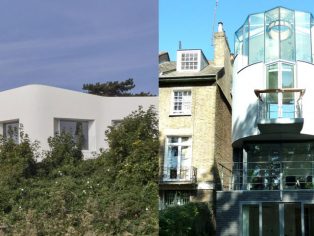 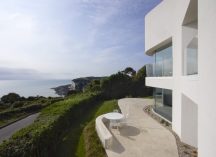 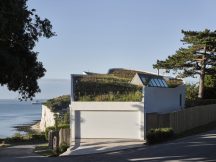 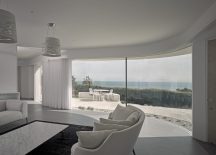