The winner will be announced live on Channel 4 by British actor Chiwetel Ejiofor on 1 December. This year is the 30th Turner Prize, founded in 1984 to promote discussion of new developments in contemporary British art. The Turner Prize award is £40,000 with £25,000 going to the winner and £5,000 each for the other shortlisted artists.

The shortlisted artists for the Turner Prize 2014 are:

James Richards will show Rosebud 2013, where filmed censored photographs from Tokyo library books are interspersed with passages of a more tender nature. Richards will also show The Screens 2013, which features projected images from a theatrical make-up manual, and Untitled Merchandise (Lovers and Dealers) 2007. The latter transposes snapshots of lovers and art dealers who were close to artist Keith Haring on to souvenir blankets that ordinarily depict members of the US military.

Tris Vonna-Michell will show Postscript II (Berlin) 2014, a slide installation based on a story about his mother’s childhood in post-war Germany with an accompanying intimate and calm monologue that reflects the personal nature of the story. Vonna-Michell also shows his first film installation, Finding Chopin: Dans l’Essex 2014 which revolves around French sound poet Henri Chopin (1922 – 2008), a reappearing figure in Vonna-Michell’s work.

Ciara Phillips will present a new installation, Things Shared 2014. Colourful handmade screenprints are pasted straight onto the gallery walls from floor to ceiling. A giant 3D ‘OK’ punctuates the room interrupting and redirecting our sightline. The installation combines new work with reconfigured and re-presented elements from existing projects. The title of the installation points towards Phillips’s long-standing interest in collaboration and her process driven approach.

Duncan Campbell will show It for Others 2013 which responds to a 1953 film essay about historical African art and colonialism, Statues Also Die by Chris Marker and Alan Resnais. Diverse archive footage and new material includes a new dance work by the choreographer Michael Clark, anthropomorphic packaging and the infamous 1971 photography of Official IRA volunteer Joseph McCann. Campbell will also show Sigmar 2008 inspired by his interest in but scant personal knowledge of German artist Sigmar Polke.

The Turner Prize, established in 1984, is awarded to a British artist under fifty for an outstanding exhibition or other presentation of their work in the twelve months preceding 17 April 2014. It is intended to promote public discussion of new developments in contemporary British art and is widely recognised as one of the most important and prestigious awards for the visual arts in Europe. 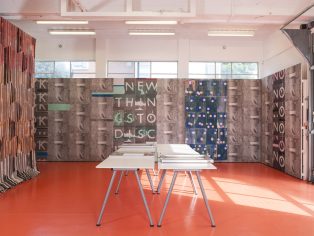