Planning consultancy Turley has secured a resolution to grant planning permission on behalf of Westgate Oxford Alliance that will see the much-needed redevelopment of Oxford’s Westgate Centre and adjoining land.

The permission for the 5.7 hectare site was granted by Oxford City Council on 11 March 2014 and will see the creation of a vibrant retail-led mixed-use destination alongside high quality residential apartments.

Westgate Oxford Alliance is a joint venture between Land Securities and The Crown Estate. Both organisations have a clear track record of delivering exemplary city and town centre regeneration schemes.

“Westgate Oxford Alliance’s investment in the city centre is significant and reflects our long term commitment to Oxford. We are delighted with this decision and look forward to moving this exciting scheme forward.”

The development will see the demolition of the southern part of the Westgate Centre, multi-storey car park and a small number of residential units. The scheme will create up to: 81,922 sq m of retail floorspace including a John Lewis department store, 26,712 sq m of café and restaurants, 5,986 leisure use, 127 new homes and two new public squares.

The development is scheduled to begin in early 2015, with opening anticipated for the end of 2017.

Sarah Stevens, director in the London office of Turley said:

“The existing Westgate Centre was first opened in 1973 and subsequently refurbished and extended in 1986. It is widely acknowledged that it has become tired and needs redeveloping. This scheme will strengthen the city centre’s retail and leisure offer, reflecting Oxford’s regional role.” 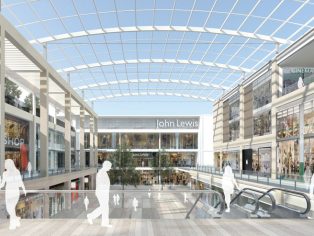