Allestree Football Club has kicked off the new season in style after receiving sponsorship from Derwent Living.

The housing provider will be the team’s main shirt sponsor during the 2015/16 season, and the funding will also help pay for match officials at home games, training facilities and a groundsman to improve the playing surface.

Allestree FC currently plays in the Midlands Regional Alliance, and has started the season well, currently lying eighth in the Premier Division.

Manager Gary McDermott said the team were thrilled to be sponsored by Derwent Living.

“It’s amazing news for the club and will help us, not just with kit, but with other costs too.

“Derwent Living is a key business in the area, so we’re really pleased to have their name on our kit and be associated with such a respectable company within Derby.”

“Football is something that’s very close to a lot of people’s hearts in Derby and a personal passion of mine.

“It’s great to sponsor a local team, give back to the community and support football at the grassroots level. I’m hoping to catch a game or two in the next few weeks and wish them well for the coming season.” 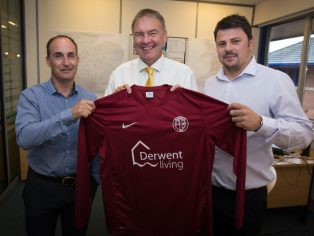