Trackside solar panels could save Network Rail £150m in CP6

Installing solar panels alongside railway track in the UK could potentially save Network Rail £30m and 895,000 tonnes of carbon per annum according to WSP – a £150m saving over the next control period.

WSP’s calculations show that if solar panels were able to be installed on 50 per cent of the trackside land in the UK the scheme could generate 2.44 GW electricity, around 40 per cent of the electricity Network Rail currently uses to power trains. It would also significantly increase solar energy production in the UK – currently we only have around 5GW of installed photovoltaics (PV) solar.

Although Network Rail would be unlikely to be able to fund the installation itself, estimated to cost £2.9bn, WSP says it would be an attractive investment to a third party investor.

“A scheme like this could generate revenue of £235m in its first year, a return on investment of over eight per cent. It benefits from having two guaranteed revenue streams – firstly through the Feed In Tariff for renewable electricity but also by selling the electricity back to Network Rail at a reduced rate. It’s a win-win situation; the investors get a return and Network Rail could save millions of pounds on their electricity bill and reduce their carbon footprint without spending a penny.”

In the report, Creating Value in our Rail Network, WSP also highlighted the under-utilisation of ‘tier two’ stations and suggests there is the potential for creating additional revenue streams by maximising the existing space and making them more energy efficient. An example would be improving and/or providing retail and entertainment facilities to make the station a community hub, in the same way many of our major stations are now destinations in their own right rather than simply transport interchanges.

“Our rail network is under enormous pressure due to decreasing public investment and steadily increasing demand and so delivering value is becoming crucial. It’s a challenge that requires creativity – trackside solar panels and improving tier two stations is just the beginning. Network Rail is a major land owner, with around 122 hectares in England alone so there are huge opportunities by making their land work harder for them.” 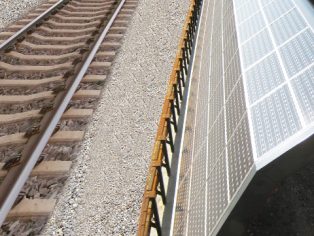