Designed by executive architect, tp bennett, in partnership with Maccreanor Lavington, who was the architect for the principal facades, the new 59,831 sq m building provides the University with a 18 per cent net increase in capacity, which amounts to an additional 187 beds.

The accommodation consists of both catered and non-catered and includes a variety of rooms to suit different student needs including en-suite bedrooms, townhouses, cluster flats, accessible studios, and apartment bedrooms.

The final design is built over an entire urban block and comprised the main nine-storey building facing onto Cartwright Gardens, a six-storey corner building on Leigh Street and townhouses on Sandwich Street. The new buildings are internally interlinked to form a single base that houses communal facilities including a garden cafe, communal areas, flexible meeting rooms, cinema room, music and games rooms, as well as cycle storage and tennis courts. The scheme also re-clad and refurbished the existing 15 storey Hughes Parry Tower.

For the facade design, Maccreanor Lavington took its cues from the larger Victorian and Edwardian buildings that have been previously added to the fabric of Bloomsbury. The design shows a meticulous approach to scale, order and relief. The main build material on the nine- storey facade is buff water struck Petersen brick, offset by white reconstituted Portland stone and glazed terracotta, with a darker water struck Petersen brick used on the six-storey building to match the soot coloured brick buildings in the surrounding area.

“We are delighted to have completed our flagship Garden Halls development – setting a new bar for student accommodation in the heart of our capital city. Having worked in partnership with the University of London since 2013, we are proud to have delivered this important project that offers exceptional architectural quality and modern facilities through leveraging private investment into the HE sector.”

“We wanted our design to reflect the history of the local area and the aspirations of the next generation who expect an aesthetic and 21st century living and work environment. While its exterior needs to respond to the historic context, the interior offers a more contemporary style with a variety of open plan spaces for socialising and studying.

“The modern student no longer views their accommodation as just a place to sleep, eat and study. Therefore, we’ve placed great emphasis on flexibility in our design, both in the facilities provided and in the room types, so that the accommodation is an extension of the university experience.

“The depth of the facade allows for the modelling of light and shade appropriate to a building of this scale. The unique Danish brick combines references to the warm pale hues of Portland stone and the texture of the surrounding Georgian brickwork, which is enhanced by the shadows of the grand London Plane trees within Cartwright Gardens. The brass and stone of the entrance reference the detailing of 19th century buildings.” 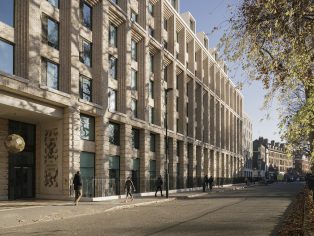