The Premier League club will build a new 61,000-seat stadium on the site of its current White Hart Lane ground.

The plans include the creation of 585 new homes, a 180-bed hotel and the Grade II listed Warmington House will be transformed into an interactive club museum.

“White Hart Lane is already an iconic stadium, steeped in history, and the new venue will not only almost double its capacity, but provide world-class facilities to watch Premier League football, international sports events and concerts in the heart of the capital.

“The stadium will also be the focal point of a major drive to regenerate Tottenham, breathing new life into the area, creating jobs and boosting growth.”

The new stadium will feature a retractable pitch to host not only football, but two American Football games a season. Fans will also benefit from a ‘sky walk’ attraction, which will allow visitors to climb the exterior of the south stand allowing views across the capital.

The Mayor of London funding is investing £28m into rejuvenating the local area and Daniel Levy, Chairman of Tottenham Hotspur, said this scheme will carry enormous public benefit.

“We are proud to be part of this important step forward for an area that has been our home for more than 130 years and where we shall continue to live and play our part,” said Levy.

“This marks yet another major milestone for this vital and complex scheme and we are grateful to the Mayor for his ongoing support. We remain focused on completing the final stages of the planning process.”

With the Mayor of London’s final approval in place, the club is believed to have been put on track to complete the works in time for the start of the 2018/19 season. 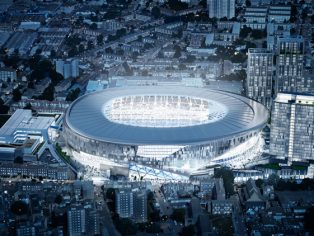