Apprenticeships provide a fantastic opportunity for anyone who wants to learn new skills and is prepared to work hard and get ahead. This is the message from Network Rail chief executive, Mark Carne, ahead of National Apprenticeship Week next week.

Mr Carne, the boss of one of the UK’s biggest employers with 35,000 staff across Britain, wants to challenge the ‘stigma’ associated with apprenticeships, and is calling on teachers, parents and employers to work together to educate more young people about the benefits they can offer. This is in line with Network Rail research showing that graduates from the company’s Advanced Apprenticeship Scheme are often the first in their friendship group to achieve their personal and professional goals.

“Our apprenticeship scheme has been running for ten years and we are incredibly proud of what our graduates have gone on to achieve. Many tell us that our scheme has fast-tracked them towards achieving personal and professional goals ahead of their friends, such as managing a team and buying a house.

“Our graduated apprentices are living proof that there should be no stigma associated with apprenticeships, and that with the right attitude and work ethic, you can reap the rewards alongside those who have chosen a university route. In fact, many of our apprentices have gone on to gain higher qualifications, including degrees, through our education programme. I would urge employers, teachers and parents to join forces to educate young people about the fantastic benefits that an apprenticeship can offer, both in a personal and professional capacity.”

Jay Williams is one of Network Rail’s graduated apprentices. He joined the Advanced Apprenticeship Scheme in 2008 and since graduating in 2011 he has had four promotions within the company. He now works as an Asset Engineer in Swindon and recently achieved his dream of buying his first home.

“I didn’t have the easiest start in life, but joining the scheme gave me the opportunity to turn my life around. I’ve worked hard, and in the space of seven years I’ve gone from being homeless to owning my own home.

“I would, and often do, recommend the scheme to anyone and everyone that will listen. Hopefully I am living proof that apprenticeships give young people the opportunity to create a real future for themselves, irrespective of their background.”

Research from Network Rail shows that it’s Advanced Apprenticeship Scheme puts people on track for a prosperous and rewarding career. A survey of graduates from the scheme found that:

Network Rail apprentices form part of the company’s 20,000-strong orange army of front line engineers and technicians who maintain, renew and upgrade the railway across Britain. This year, Network Rail is looking to recruit 150 apprentices nationwide to help deliver the biggest investment since the Victorian era through its £40bn Railway Upgrade Plan. 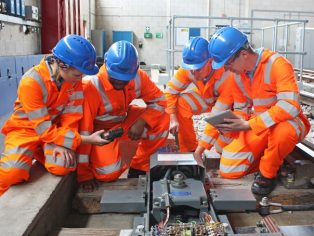