Theatre in the round – Wellington Performing Arts Centre, Berkshire

Connecting two different buildings, bringing together a school community and linking new structures with the natural and historical setting were the challenges for a theatre project at Wellington College. Jess Unwin finds out more.

Connectivity is an important part of the architectural ambition for the new £15m Performing Arts Centre at Wellington College in Berkshire.

A new auditorium with capacity for 1,400 people will not only provide the independent school with a new theatre but also serve as an assembly hall for 1,000 plus students.

The auditorium (pictured to the right of the above image) must also connect visually and physically with its existing neighbour, the Christopher Lee Theatre, which was named after the late actor, and which is to be refurbished into a smaller theatre and dance studio.

Both structures, part of a plan to create an Arts & Cultural Quarter at the college, will feature an exterior finish that connects them to their immediate wooded surroundings on the edge of Bracknell Forest.

On what is a sloping site, clever design will connect the different levels of the buildings – both inside and outside. And finally, the project must combine appropriately with the school’s nearby Grade I listed historical buildings.

To put all this in context, the college stands on a 160-hectare estate that includes sports fields, a golf course, woodland and a Site of Special Scientific Interest, containing species of mosses and liverworts uncommon or rare in southern Britain.

“We were a late invitation, so had just 10 days but that was surprisingly useful because it forced us to focus us on what the issues were.”

Studio Seilern persuaded the college to go with changes to the original brief that would, according to Seilern, ‘unlock’ the potential of project and the area around it. At the heart of the rethink is a covered area that connects the new auditorium and the old Christopher Lee Theatre.

Some might describe this space simply as a foyer for the two structures either side of it, but it’s much more than that, as Seilern explains.

“We wanted to give the college something more than they asked for and create a highly flexible, multi-purpose social and performing space, which we’re calling the Cultural Living Room.”

Partly inspired by her work at the Curve Theatre in Leicester, where the foyer is also a performance space, the Cultural Living Room is a place where students will be encouraged to stage concerts, poetry readings and art exhibitions. It could also serve as an informal teaching area or the green room to activities in the adjacent buildings. Seilern adds:

“There’s a lot of waiting time when you do rehearsals. Students can relax, do homework or use the coffee bar that will be located there as an alternative place to socialise.”

To aid these multipurpose uses, the Cultural Living Room will feature retractable and tiered rows of benches plus a theatre grid, from which lighting and sound equipment will hang.

The Cultural Living Room’s two glass walls play an important part in connecting the project to the outside world. Seilern explains:

“It should feel like it’s part of outside even though it is fully enclosed. The glazing allows views of the historical college buildings on one side and woodland on the other. We really wanted to reveal the beauty of the trees and the fact we’re on the edge of Bracknell Forest.”

At peace with nature

For the auditorium itself, Studio Seilern chose a round design:

“Without corners and constantly recessing it should merge comfortably within the woodland and not compete with neighbouring historic buildings,” explains the architect.

To further lessen the structure’s impact, half of the ground floor will be below ground level, taking advantage of the site’s natural slope.

Constructed using a steel and Metsec system framework, it will be clad with stained timber. Seilern adds:

“The idea is that the building feels like it has emerged out of the forest and timber cladding is the obvious choice.”

The dark-coloured stain will mimic the age of the nearby mature woodland – but will importantly also help visually tie the auditorium to the Christopher Lee building as the latter will be covered with identical cladding.

movement visible both inside and outside of the structures.

To this end, perhaps the most eye-catching feature of the auditorium’s design includes use of cantilever support to allow a column-less perimeter. The result is cladding that stops well short of ground level, allowing people to see in and out through glazing. As Seilern says:

“We created a recess structure so that the building appears to be gently hovering above the ground.”

“By lifting the cladding and having this ribbon of glass at the bottom you can see people walking around outside and see activities and performances inside.”

“We want the auditorium to feel alive and not be a big box sitting on the site with no activity around it. The thing about theatres is that it’s very much about negotiating different levels: balcony level, stalls level, stage level, you’ve got stage in and out, you’ve got deliveries, road level and pedestrian-access level.”

“We’ve created this periphery circulation that works with the landscaping and the site levels and that brings you from the Cultural Living Room up to the balconies and up to the entrance area. The gentle sloping we’ve incorporated is a way to negotiate the levels without having any steep stairs or aggressive slopes.

The circulation was also a factor in how the new performing arts centre will fit in with the college’s older architecture. Seilern reveals:

“We walked the site with English Heritage and with the planners. It was important the height of the new building shouldn’t overwhelm the historical structures and the views between the two sets of buildings were important too.

“Our perimeter ribbon of circulation is a promenade through the new auditorium that takes you around the building but also focuses your eye towards the historical buildings. As you progress down and around it you then see the forest. The circulation within the building is very much designed to work with the existing historical setting and buildings.”

Of course, a crucial factor for a successful auditorium is acoustics. At Wellington College, the building’s circular shape can accommodate 950 seats but this could cause unwanted acoustic effects. To counter that, several methods have been adopted.

Some of the ceiling and the walls feature acoustic reflectors while the sectional geometry and spacing of the plywood-cladding on the balcony and elsewhere has been designed to spread acoustics evenly through the interior. A striking element of the interior is a hanging acoustic reflector (plywood again) above the balcony that’s also been shaped to even out sound performance.

The auditorium must be adaptable for different kinds of performance – from voice to musical theatre and concerts – and this is achieved by changing the volume of the auditorium through retracting certain curtains and panels. Again, Seilern was able to draw on her experience at the Curve Theatre to help contribute to  solutions for variable acoustics.

Mindful that the auditorium will not be in use during school holidays, its design means it can also be set up as a flat floor configuration. This entails the removal of seats in the stalls and allows for it to be rented out as function space.

Its next-door-neighbour, the 300 plus-seat Christopher Lee Theatre – named after the late actor and Wellington College old boy – will be extensively refurbished as phase two of the project. While the steel frame and precast concrete cladding superstructure will be retained, the existing interior will be demolished.

The sustainability target for the project is BREEAM Very Good. To help achieve this, photovoltaic panels will be installed on the auditorium roof – enough to power itself as well as other buildings on the college campus. All materials will be sourced to high environmental standards, while solar gain will be tackled by the passive design of the auditorium envelope and protective coating on glazing. Work on phase one (the auditorium) began in August and completes in 2017. Phase two (the theatre refurbishment) is due to be completed in 2018.

“Because this is a school and not a Broadway theatre we had to reconcile all the different elements of design on a tight budget. It was challenging on a big building to do that without compromising the brief but we believe we’ve found the way to make it work.” 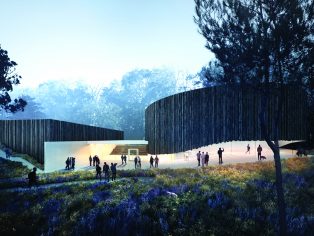