Industry-leading PVC-U systems supplier The VEKA UK Group is marking its 30th year of manufacturing in the UK with a host of celebrations.

VEKA began manufacturing in Burnley in 1986, with just four extrusion lines. The company has now become the UK’s largest supplier of PVC-U window profile and of one of the local area’s biggest employers, with 34 extrusion lines and around 400 staff.

MD Dave Jones has been with the company for 22 of its 30 years and believes that The VEKA UK Group’s success can be largely contributed to its ‘partnering’ approach with customers. “As a company, we understand that our value is entirely in the hands of our customers. If we’re not providing the perfect products for the market, we don’t deserve to succeed. That’s why we develop our PVC-U systems and services based on the valuable feedback our customers provide.

“Over the years, we have continuously invested in plant, people and technology to maintain our industry-leading position. In 2014, we invested £5m in building the country’s most technically advanced mixing plant here at our Burnley HQ, which has a potential capacity of 72,000 tonnes and allows The VEKA UK Group to have even greater control over quality, service and efficiency.

Business Secretary Vince Cable attended the official opening and described the addition of this state-of-the-art plant as ‘a European success story’.

“After three decades of UK design and manufacture, we have absolutely no intention of slowing down. At this year’s FIT Show, we were proud to unveil a host of innovative, new systems and services that received extremely positive feedback and are already being adopted by fabricators up and down the country.

“The entire team works so hard that, in my opinion, it’s no surprise that The VEKA UK Group claimed Burnley’s ‘Business of the Year’ Award once again at the end of last year.

“We’ve achieved a huge amount in the past 30 years, and we have lots of developments in the pipeline for the next 30 years. We continue to proudly invest in UK manufacturing, striving to unveil more innovative and energy-efficient products than ever before.”

The VEKA UK Group marks the anniversary with a celebratory staff event at Burnley FC’s Turf Moor (including a visit from the Global VEKA Group’s CEO Andreas Hartleif), a promotion in the local paper, a family fun day at the plant, and the official unveiling of the NEW M70 profile system. 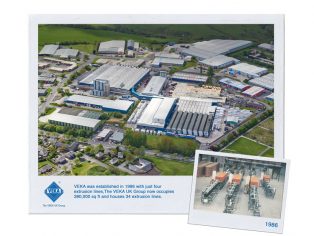