The hanging gardens of Battersea

Vauxhall Sky Gardens has been completed in the development hotbed of Nine Elms, west London, one of Europe’s largest regeneration schemes. The 36-storey tower features eco-friendly facades and ‘floating’ gardens.

Taking inspiration from the Hanging Gardens of Babylon, Caddick Developments and Frasers Property have just finished their first London excursion.

2,000 square metres of outdoor space is included in the development, with two Babylonian-style ‘hanging gardens’ open to all residents.

Split over a 36 storey tower and an eight storey block with an interconnecting podium, the property also includes seven floors of commercial office space, totalling over 4,000 square metres.

All of the homes feature their own private internal winter garden as well, with the layouts optimised to offer the best views of London.

Thermal glass facades surround the property, which reportedly enables the building to use around 50 per cent less energy. The panels turn passive glass facades into active transparent solar collectors, while at the same time controlling the energy flow through the building envelope.

The project has been designed by award-winning architects, Carey Jones Chapman Tolcher, with Yoo Design providing the interiors.

Tim Tolcher, director at Carey Jones Chapman Tolcher architects, enjoyed the opportunity to design a landmark building, “wrapping figments of wonder and modernity around a structure that will hopefully become a much-loved part of the London skyline.”

He said that being able to include so much nature in the middle of a London development “is a key part of its appeal.”

“There’s something pretty amazing about having this much greenery in such a densely urbanised part of London.”

“We’re delighted that such an ambitious concept has proven so popular, and we know that residents will be able to enjoy not only the views, but the wider benefits of Nine Elms’ regeneration.”

Chief executive at Frasers Property UK, Simon Lear described what sets the project apart from other towers. He said:

“Sky gardens in Vauxhall is one of the first sites to be developed in the Nine Elms regeneration area. There is a real energy in this part of town, and the team is delighted that Mace have now finished the tower.”

“The tower provides residents with two sky gardens overlooking Westminster and Chelsea, a 24-hour concierge service and a state of the art communal gym overlooking the gardens.”

All of the properties in the Vauxhall Sky Gardens development have now been sold, meaning it is already a success. 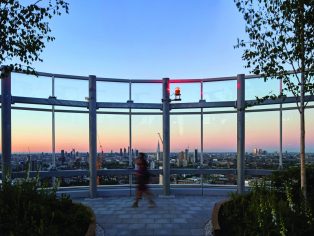 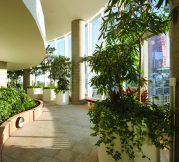