The first phase of Hull’s £25m public realm completes, creating a fitting canvas for the UK City of Culture celebrations

The first phase of Hull’s transformational £25million public realm project, designed by public realm specialists Re-form Landscape Architecture, has completed in time to mark the start of the UK City of Culture 2017. Thousands have already flocked to the city centre to enjoy the cultural celebrations and images of the revamped streets and spaces are being beamed across the globe, giving the city a new lease of life and creating a legacy that will benefit Hull for years to come.

Working alongside engineering and design consultancy Arup, Hull City Council and construction consultancy, Gardiner and Theobald, Re-form has designed and delivered the first of two phases of the complex city-wide public realm improvements. The project will transform how people use and perceive the city, and weaves Hull’s rich heritage into the fabric of the city. The revitalised public realm, which includes 14 streets and 4 public squares, has already played host to more than 342,000 people who descended on the city for the ‘Made in Hull’ launch event at the start of January which saw the story of Hull projected onto key buildings across the city.

Re-form, which has offices in Leeds and Manchester, has designed public spaces which reflect Hull’s history whilst creating a modern, city landscape which will facilitate Hull’s aspirations of becoming a world-class visitor destination.

Key elements completed as part of the first phase of works include:

“To complete a complex project of this size and scale on time is a fantastic achievement, and it’s thanks to the energy, creativity and hard work of all the partners involved that we were able to make our designs a reality in time for the City of Culture celebrations. Hull has used this milestone as a catalyst to transform the city centre, and understood that high quality public realm is vital to create a lasting first impression for visitors, and to foster local pride. Also, there are long-term economic benefits to public realm investment; for example, until very recently, Humber Street was home to a number of derelict warehouses. Now it’s fast-evolving as the independent quarter of the city, with new restaurants, bars and a recording studio opening in the last 18 months, attracting a whole new generation of people to visit and enjoy the area.”

Phase two of the project will be completed by Easter and will include the revamped Beverley Gate – a historic site made famous as the location where King Charles I was refused entry to Hull in 1642, one of the events which sparked the English Civil War. New seating for up to 160 people is currently being installed in Queen Victoria Gate, the city’s main civic square, and takes inspiration from the ribbed structure of fishing boats, creating a sculptural form that wraps around the northern end of the space.

Re-form has also been working with several artists on specially commissioned light installations, water features and sculptures that are being installed in public spaces across the city and will be unveiled in the spring. These include a series of circular fountains in Queen Victoria Square along with eight ‘mirror pools’ in Trinity Square, designed by artist Mel Chantrey, a former Turner-prize nominee.

“The transformation of Hull’s city centre public realm is some of the most fundamental and far-reaching work the city has seen in over 70 years and is helping to move our city into the 21st century, whilst respecting our wonderfully strong heritage. Although we have our year in the spotlight as UK City of Culture 2017, we need to create a legacy that has tangible benefits to the city and its residents and the public realm work has played a key part in this. The commissioning of world-class agencies like Re-form has ensured that the very best of Hull is enhanced and any areas that have perhaps been neglected over the years are refreshed.  The city centre has long been disjointed however this project has helped to re-connect Hull’s Old Town to the retail areas; and the creation of a new square and re-design of our current public spaces means visitors will now enjoying spend time enjoying the, now world-class, centre. I am delighted with the results of phase one of the works and look forward to seeing phase two come together this spring.”

‘Hull City Council’s investment in the public realm has been fundamental to the success of our opening events, including Made in Hull and Blade. The refurbished streetscape will continue to provide a wonderful backdrop to the cultural celebrations taking place throughout the year. Not only is it enhancing the Hull UK City of Culture 2017 programme, but the council’s foresight and determination to remake the city centre will contribute to its wider plan to create a lasting legacy well beyond 2017.” 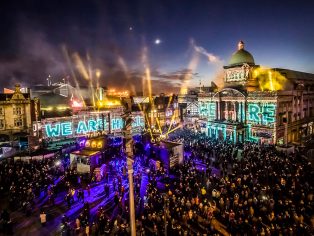 City of Culture We are Hull - Made in Hull event

The Blade is installed in the newley rejuvenated Queen Victoria Square in Hull as part of the £25m public realm scheme. Credit Thom Arran.