Tenant announcement set to kick off development at 3 Arena Central

The Cabinet Office has announced that they will be taking a long-term lease at Make’s third building designed for the Arena Central development in Birmingham.

The 239,000 ft2 office building was granted planning consent in December 2016 and was shortlisted as a potential new home for a number of government departments as part of the government’s drive to modernise and improve the efficiency of its estate.

The building is situated behind the listed former Midland Bank at 301 Broad Street and is fronting a new public square. At 14 storeys,  3 Arena Central’s geometric, punched metal cladding will be visible from Centenary Square and Mecanoo’s Library of Birmingham while forming a focal point within the masterplan.

“From the outset, the Arena Central masterplan was all about fulfilling the civic potential of this site – opposite Centenary Square with its stunning new library and the Birmingham Repertory Theatre and International Convention Centre – as well as delivering the very best in commercial office space to provide for the future of the city. So, with HSBC due to move in next year to 1 Centenary Square and planning consent granted for 1 Arena Central it’s fantastic that this building will soon come to fruition too, especially as it will help bound the new Bank Court public realm.

“Congratulations to all at Arena Central Developments for securing this high-profile tenant.”

“The team at Make has done an exceptional job in designing the highly desirable, contemporary buildings that form the core of Arena Central. The work that has gone into both 3 Arena Central and 1 Centenary Square, from which HSBC will operate its ring-fenced banking division, is outstanding and they will make a great addition to Birmingham’s burgeoning skyline.”

A double height colonnade along three sides of the building provides a direct link between Bank Court and a second more informal landscaped space, called The Terrace, which will step down the slope of the site towards The Mailbox and link to the Serpentine Path winding through the whole length of the site. Along the northern face the colonnade will reinforce a pedestrian route from Richard Seifert’s listed Alpha Tower through to the canal.

Arena Central is a £500 million scheme on a 9.2-acre site in the heart of Birmingham. Make has masterplanned the full site and designed three major buildings so far, including its gateway structure 1 Arena Central, a mixed use development on Centenary Square with office, retail and restaurant space, and 1 Centenary Square (formerly 2 Arena Central), Birmingham’s first building with LEED Gold accreditation, which, in 2018, is due to become the headquarters of HSBC’s new ringfenced retail banking division. 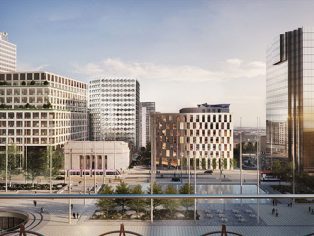 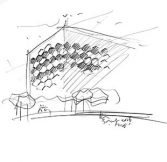 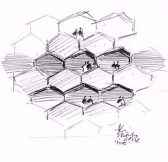