Manchester born Sylvia Pankhurst was the daughter of the founder of the Suffragette Movement Emmeline and was educated at the Royal College of Art in South Kensington. From 1906 Sylvia worked with her mother in the Women’s Social and Political Union which championed women having the vote, and women’s rights more generally.

In 1924 Sylvia, and her anarchist Italian boyfriend Silvio Corio, who was a sculptor, moved to a cottage on the High Road in Woodford Green. At this time Woodford Green was a rural village, associated with the gentry and well-heeled politicians such as Winston Churchill. Their arrival scandalised local society.

Sylvia named the property ‘”Red Cottage”, after her political leanings, and invited political thinkers into her home ranging from refugees fleeing the fascists in Italy to Labour supporting political campaigners. The cottage had an extremely large and pretty rear garden so during the summer months Sylvia turned the ground floor and the gardens into a “tea shop” in order to raise funds for the suffragette movement.

Three years after arriving at the “Red Cottage” Sylvia and Silvio’s son Richard was born. When Mussolini attacked Ethiopia in 1932, Sylvia commissioned Silvio to create a stone sculpture as a protest against the invasion. In 1933, the couple moved to a much larger house called West Dene in Charteris Road. Silvio died in 1954 and Sylvia emigrated to Ethiopia where she died at the age of 78 in 1960. In 1939, the “Red Cottage” was demolished and replaced by four houses, with Sylvia’s beautiful original garden destroyed and divided into four small rear lawns. All that remained to mark where her cottage stood was the stone sculpture and a plaque highlighting that this was the site of her East London home.

By 2009 the four 1930s houses were badly neglected and three in particular were extremely dilapidated and in danger of collapse. Planning permission was therefore provided to redevelop the site with a low rise scheme of newly built apartments complete with a large private landscaped communal garden.

The site contains protected mature trees dating back to the time of Sylvia Pankhurst, which Galliard Homes carefully protected and work around during the construction phase on site, liaising closely with the Tree Protection Officer at Epping Forest Council to ensure the health and well-being of the trees.

The new apartment building, known as Highbeam House, has a traditional white render and brick façade with features including large windows, oriel windows, balconies, French doors and ground floor terraces. It provides 14 luxurious two and three bedroom apartments, including duplexes; complete with lift and staircase access to all levels and underground car parking.

In order to return the property to the ambience it enjoyed when Sylvia Pankhurst was in residence, Galliard Homes has skilfully recreated a magnificent single garden to the rear of the apartments. These have been designed by award winning landscape designers Bartholomew Landscaping, founded in 1989, who are Chelsea Flower Show and BALI Awards medal winners and have created beautiful gardens for private and commercial clients in some of London’s best addresses.

Surrounded by mature trees and planting, the main landscaped garden has paved terraces and walkways with feature timber loggias; bordered by hedges and beds of flowers and plants. In its centre is a sweeping lawn interspersed with mature trees and planting. Recalling the famous “tea shop” gardens of Sylvia’s “Red Cottage”, the landscaping provide a focal point and green views for the apartments and form a private and tranquil space for residents of Highbeam House to relax in or entertain people.

Each of the apartments has a spacious reception room with Oak veneer timber-laminate flooring and French doors opening onto either a balcony or private garden terrace. The kitchens are either separate or open plan with white high gloss units, stone worktops and integrated Smeg appliances.

Galliard Homes has also restored the stone sculpture and plaque which commemorate Sylvia Pankhurst’s association with the site, incorporating it as a proud feature of the new apartment scheme.

“Sylvia Pankhurst was an important champion of women’s rights and civil rights in general. Her “Red Cottage” home was a haven for political refugees and a place where civil rights were promoted. When her home was demolished in 1939 her famous “tea shop” gardens were destroyed and the leafy and tranquil ambience of the site was lost. With the creation of Highbeam House we have returned the site to its original roots – having just one property, rather than four – on the land. This has also enabled us to recreate a magnificent single rear garden, which are perfect for people who love gardens but don’t want the hassle of maintaining it themselves. Potential purchasers can visit the dressed show-apartment and landscaped gardens to experience the quality of the development and we hope that some visitors will appreciate the significant history of the site and the civil rights work of Sylvia Pankhurst.” 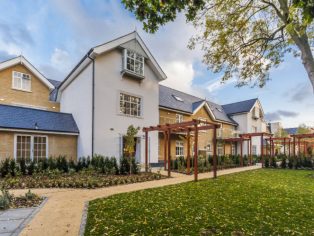