The Surface Design Awards champion the best in progressive design and innovative surfaces and are the only international awards to focus exclusively on surface design.

Organised by Montgomery Exhibitions, this year’s Awards attracted an extremely strong field of entrants, 25% more than in 2013, with submissions from architects and interior designers around the world. 33% of entries were from outside the UK.

“It was certainly rewarding to be part of the judging panel for Interior surfaces this year. I was particularly impressed by the level of creativity and the truly stunning use of materials and craftsmanship in often challenging projects.”

The entries stimulated much discussion amongst the judges who were delighted by the wide variety and the international flavour of the entries. Projects and designers from the USA, China, Japan and the UAE are among the finalists. The key trends emerging from the strongest entries included the creative use of natural organic materials, a delight in craftsmanship, retro themed designs and an imaginative use of light and light technology

“There are some very high quality entries showing distinctive and original design. We have seen an increased confidence and willingness for architects to engage with surface design, sometimes created by the repetition and variation of exquisite components.”

This year saw the introduction of the new ‘Light and Surfaces’ category, dedicated to light, surfaces and the importance of innovation in the field. “Until now most designers considered light and surfaces separately” said Sharon Stammers of Light Collective. “This year’s entries show that at last they are beginning to consider them together”. Renee Mascari of KBB National Training Group said:

“We need to inspire to educate, and the finalists are without doubt inspiring. Through these awards, Surface Design Show is supporting innovation in the industry”

Sponsors for the twelve awards spanning six categories for both interior and exterior surfaces are Porcelanosa, Burlington Stone, James Latham, Design Exchange and Samsung. Interface has sponsored the Supreme Award.

The trophy for each award has been created by Bottle Alley Glass.

The overall winners will be announced at an awards ceremony at Surface Design Show, Business Design Centre in London on 6 February 2014.

The shortlisted projects are:

The winner of the Supreme award sponsored by Interface will be selected from the list of finalists and announced on Thursday 6th February 2014. 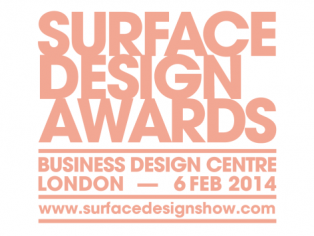