A construction student from Sunderland College is celebrating after scooping a prestigious industry award.

Trainee building surveyor, Chris Armstrong, has been awarded the Chartered Institute of Building (CIOB) North East Student of the Year.

The 20-year-old was presented with the accolade at the CIOB North East’s Summer Ball and Awards evening at Wynyard Hall on Friday.

Chris, who was nominated for the award by his lecturer Gerry Ruffles, said:

“I was very surprised when I found out I had won because of the calibre of the nominees, but I feel very grateful and delighted to have been selected as the winner by the judges.”

“Winning this award is one of the highlights of my career so far. My goal is to become chartered within the building surveying profession – I’ve always been interested in this industry and I enjoy working on a wide range of projects.”

“I have studied at Sunderland College for the past four years and it’s been great to meet so many different people and to study something I’m so passionate about. The lecturers have been brilliant and it’s a pleasure learning in that environment. I would particularly like to thank my lecturer, Gerry, and curriculum leader, John Cartwright, for their support and the knowledge they have shared with me over the years.”

The Penshaw-based student has worked as a trainee building surveyor at construction consultancy company, Faithful+Gould, throughout his HNC and has now been appointed as assistant project manager.

Chris, who achieved the top grade of distinction for his HNC, was the leading member of a four-strong team that won the CIOB’s North East Student Challenge in 2014 and was also part of one of the winning teams at the Heritage Skills in Education Awards last month.

“Chris has constantly shown his commitment and motivation to his studies and the building industry throughout his time at the college. His work has been exemplary and he has provided inspiration to his fellow students.”

“This award is well earned and I’m delighted that the judging panel recognised Chris’ talents. I am certain Chris has a very bright future in the building surveying industry and I’m looking forward to watching his career develop.”

“The Student of the Year Award is an annual CIOB North East competition, open to students enrolled on construction related courses at colleges and universities throughout the region. CIOB North East is committed to nurturing young talent in the industry, and to showcasing the huge range of job roles and opportunities which exist within the sector. Chris was a very deserved winner of this year’s award, and I have no doubt he will go far.”

“As the headline sponsor for the CIOB’s Summer Ball and Awards 2015, Corepeople Recruitment was delighted to present the Student of the Year Award. Chris was a deserved winner demonstrating all-round commitment to his own personal development through his own academic study, his work, CPD events and actively engaging with CIOB in the region.” 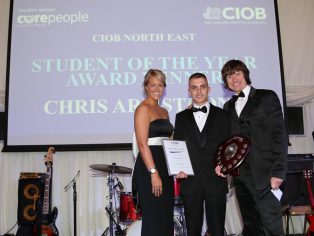