AS UK housebuilder Redrow Homes reports a turnover in excess of £1 billion for the first time alongside record annual profits, the company’s Lancashire division is also marking a productive year.

While Redrow’s nationwide success is a strong sign of a more buoyant UK housing market, the achievements of its divisional arm operating across Lancashire and parts of Merseyside and Greater Manchester indicates the regional market is following suit.

In the year ending June 30, Redrow’s Chorley based operation, one of 12 operating divisions in England and Wales, completed around 480 new homes across its developments from Lancaster in the north down to Manchester and from Liverpool and Lytham on the west coast across to Rochdale.

The regional company purchased nine new sites which, once complete, will have a total sales value in excess of £145 million, while stimulating dozens of new jobs and bringing a host of other economic benefits to local communities.

During the year, Redrow Homes (Lancashire) launched new developments at 12 locations, including Moston and Walkden, in Greater Manchester, three in the Chorley area, one in Lancaster, one in Fylde, one in Warrington, one in the Ribble Valley, one in Preston and another in Wyre.

In the current financial year, the Lancashire division expects to increase the number of homes it builds to nearly 520 and to launch five new developments as it continues its rapid growth.

“It’s been a productive year of growth for our division and we are pleased to have played our part in a record breaking year for the Group.

“Over the last 12 months we have finished five developments and launched 12 more. We have a long and proud history in this region and now that the UK housing market is back to good health, local house hunters are returning to Redrow as they search for high quality, traditional homes.

“Looking to the future, it’s set to be another exciting 12 months for us as we prepare to launch five new developments. Two of these will be in Liverpool, where we have signed a pioneering partnership agreement with the City Council and Liverpool Mutual Homes to deliver 1,500 homes across the city.

“We also have plans for new homes in Prestwich and our land team is firmly focussed on acquiring further new sites in north Manchester and along the M62 corridor.”

Redrow’s Lancashire division is based in Chorley and directly employs 147 staff – of which 21 are trainees and apprentices – while providing work for dozens of subcontractors across its various building sites.

Nationally, Redrow this week reported strong growth. Turnover exceeded £1 billion for the first time, operating profit increased by 54 per cent, and the number of new homes completed rose to 4,022, a 12 per cent increase over last year and 42 per cent up on 2013. The company also bolstered its total workforce by 22 per cent to 1,651 employees.

Redrow Homes is one of the country’s largest and most respected housebuilders, with a strong emphasis on high quality housing in prime locations. 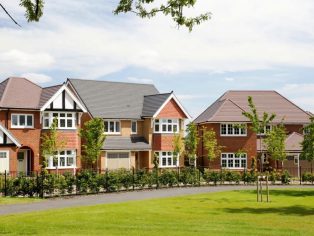