Studio Vertebra has demonstrated great success and became a finalist at the World Architecture Festival (WAF) Awards, which is considered as one of the most prestigious awards in the architecture world.

Achieving to remain on the short list at the World Architecture Festival which will be held in Berlin Arena on 15-17 November 2017, The Studio Vertebra’s design Volume Istanbul will be presented to the jury under the category ‘Office Projects’.

Many projects from various countries of the world have applied to the World Architecture Festival, which will be organised for the 10th time this year.  The finalist projects in the competition will compete in 30 subcategories under the main categories ‘Structure’, ‘Project’ and ‘Landscape’.  In the grand final on 17th November, 2017, the category winners will be awarded the awards of ‘The Structure of the Year’, ‘The Project of the Year’, ‘The Landscape Design of the Year’ and ‘The Small Scale Structure of the Year’.

Volume Istanbul, designed by Studio Vertebra in Kurtköy, is located in an area close to the Sabiha Gökçen Airport where office buildings are concentrated. The project, which is better off its neighbours with the same functions, was designed with a competitive approach. Its location in the ‘air mania’ region, situating on a land parcel with elevation difference, and demand on modular separable areas were considered as the most important design criteria.

Since the parcel is located on the airport line, the altitude setup played an active role in the design. Designed to have asymmetrical pieces, structure of the Studio Vertebra maximises the diagonal line altitude limit. The project, which is designed with modular system solutions, provides a dynamic structure by ensuring mass mobility with the tusk tenon of the axles. This flexibility facilitates processes such as sales and leasing, thereby creating an office structure that can be tailored to the needs of the day.

Moving the landscaping area highlighted in the entrance courtyard to the terraces on the upper floors has allowed the building to breathe. Unlike closed glass box plazas Volume Istanbul is an office project with private terraces and green courtyards that encourage interaction with outside. It stands out with its courtyard on the entrance axle which serves as natural lighting and air conditioning facilities for all units.

Studio Vertebra aimed to draw back the mobility in the main street by withdrawing from the site plan, as there was no square at the city level. In this respect, a square creating a dynamic relationship with its surroundings was designed. The square was set up as a meeting and intersection point; so that it benefits to the surrounding businesses thanks to the human trafficking it attracts. Studio Vertebra has thus created a design that offers double-sided benefits to the project/city relationship. Volume Istanbul, shaped by all these references, is carried into effect as a project that has established a right dialogue with the city. 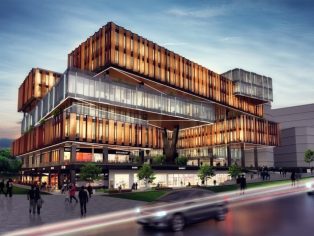