​​Proposals for the 12,000 capacity Bristol Arena have been submitted to Bristol City Council for planning approval following public consultation.

Strong support for the arena was expressed through the consultation with over 86 per cent of respondents fully or broadly supporting the Bristol Arena plans and 86 per cent of people suggesting that pop-up events and outdoor activities would help create a vibrant place.

Following the consultation, plans have been developed further to show how event spaces in front of the arena can be used for performances, outdoor cinema, festivals and markets. Water jets will provide an area for play when events are not taking place and green terraces will create an informal seating area for picnicking or recreation.

A number of concerns were raised during the consultation around access to the arena site, the quality of pedestrian and cycle routes particularly from the south, traffic congestion and parking on residential streets. As a result some changes have been made to the proposals.

The council has also committed to putting funding aside to cover set-up costs of parking controls in vulnerable residential areas and extend the hours of existing RPS controls as necessary. Proposals will be worked up in consultation with local people so that controls can be in place by the time the arena opens.

“The submission of the planning application is another significant step towards the delivery of this vitally important cultural venue for our city region. The consultation has demonstrated the strong support that exists for the arena, with some reservations regarding access and transport connections that we have listened to carefully, resulting in a number of changes being made to the plans. This includes further consideration of traffic and parking management and an improvement of pedestrian and cycle access from arena 3 Lamps Junction to the arena site, something that local residents were particularly keen to achieve.”

Head of the design team and Senior Principal of Populous, Nicholas Reynolds, said:

“The design for Bristol Arena has evolved and grown in detail over the past few months. The simple, elegant form of the lower plinth and upper elipse brings to life the idea of ‘ground and sky’. This creates both a strong civic presence and a dynamic, reflective surface which responds to the surrounding landscape. During daylight the curving form and reflective cladding catch the light, changing with the weather and season; whilst at night, with the facade softly illuminated, the striking form is most evident, becoming a new landmark in Bristol.

“The extraordinary setting of Arena Island is brought to life through dynamic landscapes and a series of terraces that flow from river to park, and through village to a new public square, providing the platform for a whole range of outdoor events and community activities.”

“It is good to see the arena project being driven forwards and that the planning application has such wide support. The arena will add significantly to the cultural offering of the city and the region and will highlight the great quality of life and opportunity in the West of England.”

In addition to overall support for the arena, there was very positive feedback (85 per cent fully support or broadly support) on creating a highly sustainable arena. Following consultation solar panels have been added to the roof of the arena further boosting the venue’s green credentials. The council is also working with the operator to make sure sustainable methods of transport are promoted to visitors.

The material for the upper façade of the arena has also been changed from glass cladding to perforated steel. This allows for a more subtle lighting effect that will have reduced light impact on neighbouring areas and has the potential to incorporate public art.

Two public information sessions are being held in December with a presentation of the submitted proposals and an opportunity to ask questions of the project team: 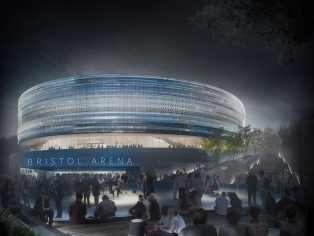 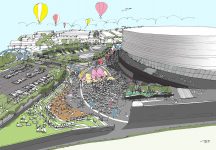