Stevenage town centre can look forward to the addition of more new homes thanks to plans to transform a car park into an eight-storey apartment block.

Plans for the new block have been announced by real estate developer, The Blackmore Group, which has been granted planning permission from Stevenage Borough Council to complement ambitious town centre redevelopment plans.

The new homes will be located less than half a mile away from Stevenage Railway Station, next to Six Hills House.

Comprising of 64 one, two and three-bedroom apartments, the £18m development will be the largest undertaken by The Blackmore Group so far.

The company are due to begin work in June with completion of the scheme scheduled for late 2019.

The announcement comes as the £350m redevelopment of Stevenage’s town centre is being finalised, which will see new shops, bars, restaurants, 600 homes, a park and a council building. The wider regeneration will bring Stevenage’s town centre ‘into the 21st century’ according to councillors and The Blackmore Group aims to provide high quality homes as more young professionals are attracted to the town.

“The regeneration plans for Stevenage town centre are really exciting and will see the town becoming more of a destination of choice for young professionals.”

“We are delighted that one of our flagship developments will be part of the transformation of Stevenage.”

“The new block will be an ideal base for business and commuters, with one of the main attractions being the fast and frequent train services to King’s Cross in London, a journey which takes just 20 minutes. Additionally, there are direct trains to destinations such as Cambridge and Peterborough.”

“It’s an exciting time for us to be coming to the area and we have ambitious plans to invest more into Stevenage in the near future.”

For more information about the development visit www.blackmorehomes.com 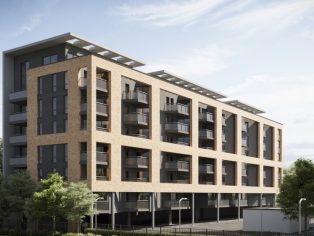