Sparking a time for change

The focus for most housebuilders is to have all lighting and electrics installed according to strict specifications, on time and on budget. But how might those specifications change as we strive for ever more energy efficient homes? Bill Rumble, director at BillSaveUK discusses.

A recent report by the Federation of Master Builders (FMB) highlighted the shortage of skilled trades in the housebuilding sector is widening and is now an issue with roofers and electricians. Shortages of electricians in particular are at their highest level for four years and by all accounts, it’s the smaller developer which is being hit the hardest. This is something to which the Government is being forced to find a solution, amongst the wider challenge of meeting the UK’s housing shortage and whatever the outcomes of Brexit may be.

But look at this another way, could this be the opportunity the industry needs to reassess the skill sets required to build the homes of the future? The Government is singing the praises of modular building methods – more homes, cheaper, faster, that’s a break away from traditional methods in answer to a crisis. It’s something which has demanded a new way of thinking, albeit suggesting the re-ignition of a style of home built in the 1940s. Why not consider a change to the way electrical requirements are specified? This many sockets, that many light switches – is it time to think about the future and use whatever funding is made available to train a new generation of sparks and educate the industry on a more intelligent and energy efficient electrical spec?

At the moment, the latest energy efficient electrical products don’t get much airtime in the new build market. Smart thermostats, voltage optimisers, solar PV battery storage for example – it’s all technology which is available now and can deliver significant savings on homeowners’ energy bills – not to mention a reduced carbon footprint. But adoption by the housebuilding industry is slow, although technology is advancing at a fast pace, as are consumer expectations.

Take smart thermostats, which are rapidly increasing in popularity in the retrofit market. Memorable advertising jingles immediately spring to mind and if you consider how a growing number of household appliance manufacturers are now incorporating smart phone connectivity, smart homes are no longer a pipedream.

To explain briefly how they work, smart thermostats let homeowners control their home’s temperature remotely via a tablet, smartphone or desktop. They’re made up of three components – the first plugs directly into the boiler and can talk wirelessly to the second component, the thermostat. The third component is an app which is downloaded to a smartphone or tablet. Users remotely control the thermostat via the app, allowing them to adjust their heating wherever they may be.

Volume housebuilders aren’t yet offering smart thermostats as standard in their developments, but the opportunity is there for them to lead the way in the adoption of this technology, and some of their customers might expect them to. In fact, in his speech at the Sustainable Energy Association’s reception just before Christmas, Lord Deben, Chairman of the Committee on Climate Change stated that if we only mandated that every new house has to have one of these systems installed, it would make a huge difference.

Voltage optimisers are another energy saving option. They’ve been on the market for a few years and basically work by reducing the voltage appliances need to be able to function. In addition to saving energy and money, by ensuring only the necessary voltage is used appliance lifetimes can be prolonged, as they’re not trying to work harder than they need. To get any notable benefit from these gadgets however, a property would need to be located close to the substation and therefore potentially receiving power levels in excess of 250 volts. But whether the product itself is right to install or not, the overall message remains – the housebuilding industry should be open to considering new electrical and energy saving technologies.

The final elephant in the room, for now at least, is solar PV battery storage. It’s not uncommon for developers to build houses with solar PV systems installed – particularly for social housing briefs or on sites being delivered by smaller developers. So could the logical next step be battery storage?

If you’re not up to speed on the inner workings of solar PV systems, they basically can’t store the energy they create. This is how all the headlines were generated a few years ago when homeowners were building up vast credits with power companies by selling their energy back to the Grid, via the Feed in Tariff programme.

Times have changed and technology has advanced, meaning that homes with solar PV systems either already installed or as part of the overall package, can now have a battery storage system, allowing them to use all of the energy they capture from the sun. The batteries are of some size, but nothing too big to slot into a kitchen cupboard space and can save homeowners significant sums on their energy bills. Again the jury’s out on whether costs stack up over time – installation costs, replacing batteries etc, but for gadget-mad house buyers with a green conscience or a high disposal income, it’s a technology worth considering.

As with any new technology, research and development is key and of the items I’ve talked about here, it’s probably only the smart thermostats which are likely to be adopted on a large scale, and as things currently stand, there is very little wriggle room in developers’ build programmes to do anything other than deliver the standard spec sheet. Smaller housebuilders seem more open to new ideas… but with a growing shortage of electricians, there’s a pressing need to consider how we approach housebuilding and all of its associated specifications in the future. 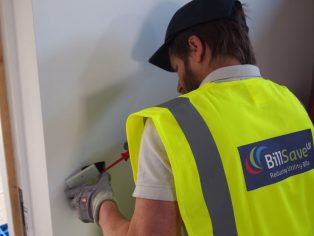