Whilst DECC last week indicated moves to reduce the Feed-in-Tariff and Renewable Heat Incentive (RHI) subsidies in the UK and set proposals to reduce the Renewables Obligation support, there remains strong political and public support for greater deployment of solar in Scotland.

“Scotland is at the forefront of the renewables industry and solar is an important part of our renewable mix. We are actively seeking to encourage greater deployment of solar on the roofs of more Scottish homes and businesses to help them generate their own cheaper and greener supply of electricity.”

“Installation of solar power projects across the UK has increased dramatically over the last few years thanks to the fall in the price of solar panels.”

“The reduction in subsidies are continuing alongside a significant reduction in the cost of solar. In the past four years solar costs have reduced by 70 percent, taking us closer to a level of parity with Government support. The targets for 2020 in Scotland, to have all electricity supplied through renewables is ambitious and therefore it is imperative that we see solar playing a key role in this. Not only will this support a reduction in carbon emissions, it will provide lower cost energy that can play a significant role in alleviating fuel poverty in Scotland. Investing in solar will not only give businesses the opportunity to reduce operating costs and help them become more attractive to their supply chain, but will also create a significant number of new jobs.”

Last month The Solar Trade Association (STA) issued its ‘Solar Independence Plan’ to the new UK Government. Setting out a proposal for how to most effectively remove subsidies by 2020.

The STA reports that 10 percent of the UK’s renewable power comes from solar power, deployed on over 670,000 homes and thousands of farms and businesses.

The latest DEFRA statistics show how the agricultural sector in particular are continuing to embrace renewables as a form of diversification to boost income and control costs.

Perthshire farmers MJ & J McLaren require a huge amount of electricity to supply power for the cold storage of 7,500 tonnes of potatoes and the chilling of up to 30 tonnes of broccoli per day at Cronan Farm. The McLaren’s installed a 720 panel (176kWp) solar array in 2013, and then earlier this year added an additional 290 panel (72.5kWp) array. In the first six months of 2015 the panels have performed 10 percent ahead of budgeted yield.

The 249kWp system, installed by Forster Energy, is one of the largest in Scotland and was recently visited by Murdo Fraser, who is Convenor of the Committee for Economy and Energy. He said “it was a great opportunity to see first-hand these benefits and meet those involved.”

“When reviewing how to reduce our energy costs, solar presented the best option for our business. The system is working better than we’d expected and we’re well on track to see a return on our investment.” 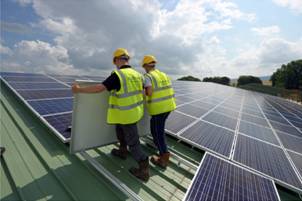