Pellings, the multi-disciplinary architectural, property and construction practice has completed the £1.3 million refurbishment of the Sobell Leisure Centre in Islington, north London, which was opened in 1973 and was the only leisure centre to be designed by celebrated Centre Point architect Richard Seifert.

Opened by the Duke of Edinburgh in 1973, the Sobell Leisure Centre was a gift to Islington’s residents from Sir Michael Sobell, a wealthy philanthropist. Since its launch the centre has become a much loved facility and a hub for sporting development including being an official training facility for volleyball during the London Olympics in 2012.

Pellings was appointed by the London Borough of Islington to provide concept and outline design for the internal refurbishment of the centre, to undertake the Construction Design Management Co-ordinator role, and Employer’s Agent services (space planning and achieving Sport England compliance).

The refurbishment has been funded by the London Borough of Islington, Sport England and the London Marathon Charitable Trust.

The centre is situated in the heart of Islington, minutes away from Arsenal’s Emirates Stadium, and boasts a sports hall, Junior/Gallery Gym, exercise studios, squash courts and ice rink.

Pellings’ brief was to remodel the existing space to encourage wider participation in sport in the local area, increase membership within the 13-19 year old age group, and make the centre more accessible for disabled and disadvantaged members of the community by bringing the centre up to Sport England and Part M (disabled access) requirements.

The scope of works comprised the refurbishment of the junior gym to include a sprint track, part-refurbishment and expansion of the Gallery Gym to provide a boxing facility, remodelling of existing changing rooms, and refurbishment of meeting rooms. An unused shower/store area was also refurbished to assist with the phasing of the construction works. The refurbished areas also provide a new accessible changing places unit comprising an adjustable table, ceiling track hoist, wash-down facility and accessible toilets.

Furthermore, as part of the Olympic legacy, a new volleyball court was created in the main arena using donations from the London 2012 Olympic Legacy Fund.

The completed refurbishment has provided a state-of-the-art facility fit for use by all members of the local community. The Sport England transformation has not only dramatically improved the centre’s facilities such as ‘Boxfit’ fitness classes for all ages, but has also created an ‘urban space’ which should help to increase the centre’s appeal to young people. Also, there are increased opportunities for basketball, gymnastics, netball and volleyball within the centre.

The design & build construction contract was undertaken by local contractor Cosmur Construction (London) Ltd and the works were completed in 10 months in time for the centre to be used as the main counting station at the General Election on May 7th 2015.

The centre remained open for over 12 hours a day during the construction period for the use of the whole community. 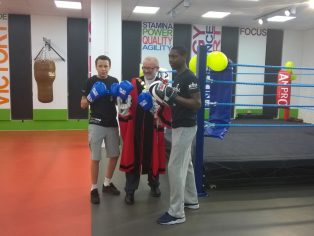