Hong Kong’s West Kowloon Rail Terminus is using more than 800 actuators from SE Controls Asia Pacific as a key part of the building’s smoke control system to ensure that all 423 vents open simultaneously to ensure escape routes are kept clear of smoke should a fire occur.

Opened in late September 2018, more than 80,000 passengers are expected to use the new terminus each day to travel between Hong Kong and the Chinese cities of Guangzhou and Shenzhen on the new 579 seat high speed trains, which can reach up to 236mph (380km/h). The rail station’s ticket office, platform and separate arrival & departure level extend 4 floors below ground level.

An integral part of the curved façade was the incorporation of 432 bottom hung smoke vents, each of which is a different size and has its own unique parallelogram or trapezoid shape due to the structure. In addition, as they are located in the uppermost level of the inclined clerestory glazing and skylight of the terminus roof, none of the glazed smoke vents were installed vertically.

As the atrium acts as a single large smoke zone, every smoke vent opens automatically when a fire is detected, to provide maximum smoke and heat exhaust ventilation. To achieve this, SE Controls Asia Pacific recommended and supplied a total of 866 SEPO failsafe pneumatic actuators, as well the pneumatic pressure and force calculations and the designs for the special brackets used on each vent. Depending on the size of the vent, either 2 or 4 failsafe locking catches are installed on each ventilator.

Once the automatic atrium vents are fully open and hot air is vented, make up air enters the building below the 2.5 metre smoke layer through the escalator void openings with fans operating to compensate for the volume of smoke being vented from the fire area. Automatic fire suppression systems and supplementary smoke curtains are also installed as part of the building’s fire protection systems.

SE Controls Asia Pacific Director, Alex Luk, explained: “We have been involved in a number of iconic and innovative projects including the Kai-Tak Cruise Terminal, the Hong Kong-Zhuhai-Macao Bridge as well as the West Kowloon terminus.”

He added: “Each project had its own specific challenges and with this one, the synchronised operation or more than 400 smoke vents, each with its own individual shape and dimensions, was a unique task, where we used our extensive experience to develop the final solution. The entire project is an outstanding achievement and has already made a positive impact on the landscape, as well as for travellers. I’m delighted and proud that we were involved in such a key part of the building’s safety systems.” 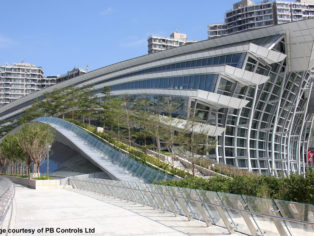