Skanska has signed a contract with HAV Eiendom to build a hotel and retail space as well as to develop apartments in Bjørvika, Norway, one of Oslo’s most sought after areas. Skanska Property Development’s investment amounts to NOK 205M, about SEK 200M. The construction contract is worth NOK 495M, about SEK 490M, which is included in order bookings for Skanska Norway in the third quarter in 2016.

The two buildings to be erected include underground parking garage, basement and technical rooms below ground and two floors above ground with commercial premises. From the third floor up, one of the buildings will comprise of seven floors with a total of 253 hotel rooms, while the other will contain seven floors with 54 apartments.

HAV Eiendom develops the hotel and the commercial spaces while Skanska Property Development develops the apartments. Skanska Norway is the general contractor for the entire project, which has a total gross area of 26,300 m².

Skanska’s investment relates to the cost of land, in addition to the costs related to the apartment’s share of the garage, basement and spaces on the first two floors above ground.

The project has ambitious environmental targets. The commercial premises of the building has the ambition to achieve the certification BREEAM-NOR Very Good.

The construction work will start in November 2016 and is planned to be completed in June 2019. 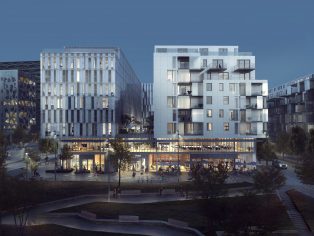